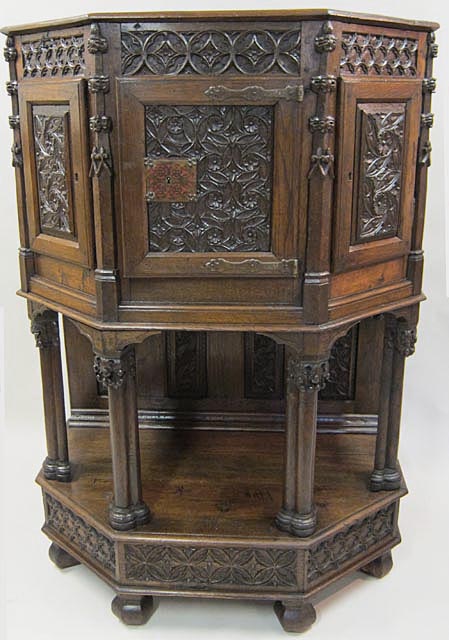 Sometimes in the antiques business, items turn out to be more interesting than they first appear. Such was the case with this cabinet, which is heavier, older, and more enigmatic than we initially thought.

In overall design, it is a classic dressoir in hexagonal shape, meaning that the storage cabinet is on the top and the bottom space is open with a pot board on which items can be displayed. Such structures were used in both Medieval and Renaissance eras as useful repositories for valuables (locked up with a key) while at the same time allowing prized possessions to be displayed below. These uses were embraced in the 19th century as well when furniture designers began copying pieces from the past (often to palm off as originals from the earlier period) and incorporating motifs based on the architecture of the areas in which they lived.

This cabinet is solid oak, and we mean solid! There are none of the short-cuts seen in furniture from the late 19th century and early 20th century such as backs made of pine and doors layered with beech, poplar or other cheaper woods. This is the real thing, as anyone who tries to lift it will learn!

There are some unique aspects to this cabinet which have left us scratching our heads as to its origins. It is the first Gothic cabinet we have ever offered that did not incorporate a single arch anywhere in its design. Also evident are figures on the door panels at the side involving elements of Breton decoration such as spiraling lobes surrounding central -- but not identical -- blossoms.

The spandrels supply a curve atop each column of the lower part but it would be a stretch to call the intervening space an arch. No arches are incorporated in any of the fenestrage or tracery, whether at the back of the pot board or on the door panels.

Among the most Gothic characteristics are the finials between each panel of the upper part and at the back on each side. Beautifully carved, their crocketing or tiny, curved acanthus leaves, and top in the shape of a three dimensional fleur-de-lys, are a testament to the sculptor’s skill in carving a material as hard as oak.

While lacking Gothic arches, this piece is still decidedly Gothic when it comes to elements making up the ornamentation of the doors and other vertical panels of the upper part of the cabinet and the horizontal frieze panels around the top and the bottom. Based on elements of tracery or fenestrage common to Gothic architecture and furniture, these include quatrefoils embedded in circles, flowers, and elliptical shapes. All are beautifully carved. A curiosity is why the outermost panels in the back of the base do not match – the left appears to be an upside-down version of the right, or vice versa. Perhaps an accident or designed to intrigue us?

From the absence of arches and a more architectural look to the tracery, we have concluded that this piece likely preceded the fashion for Neo-Gothic or Gothic Revival design ushered in by Eugène Viollet-Le-Duc (1814-1879) with the refurbishment of Notre Dame Cathedral in Paris and later spreading throughout France. Impact on furniture was seen most prominently late in the 19th century and into the 20th century before World War I (see, for example, items 5179 and 4117). Without these precedents, the maker of this piece would have relied on his imagination and incorporated Gothic elements without the standard architectural vocabulary of Neo-Gothic design.

There is some insect damage, as shown below, but no current infestation. Overall, the piece remains sturdy and useful, a testament to the virtues of solid oak construction and Gothic design.

With three doors and interior shelves, this cabinet provides useful storage space while displaying the richness of Gothic design in an ideal size – smaller than the typical dressoir but wider than the argenterie.