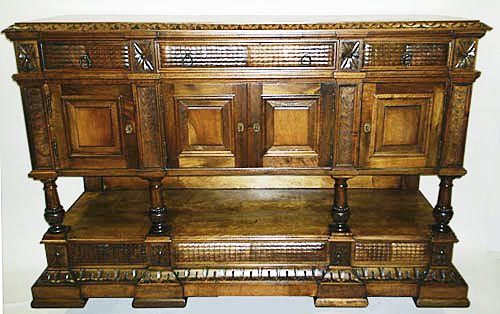 This credenza or buffet cabinet is massive and imposing. Its overall design stems from the 15th century in Florence where the term credenza is believed to stem from the Italian for "belief." Back then, the credenza was a substantial cabinet into which food was locked for safe keeping - not from thieves or vermin, but from murderers whose weapon of choice was poison. The cabinet represented the owner's "belief" that the food was safe. For more about poisoning and a link to Florence, see our article in the Quarterly Newsletter of the Wine Society of Texas.

This type of sturdy cabinet swept Florence in a wave of fashion, displacing its predecessor in the form of brightly colored and painted furniture more flimsy and less likely to discourage poisoners. Rather, the emphasis was on the beauty of the wood itself, especially walnut, and the intricate carving that became the preferred adornment. Owing its overall design to architecture and the innovations sweeping Tuscany around the same time, the credenza was characterized by column supports and pilasters as well as broad mouldings.

In height, just above waist-level, this cabinet is typical of the 15th century design objective that a richly woven cloth cover the top for use in formal dining occasions where the serving vessels and utensils would be set out. When not in use, these utensils would be stored in the drawers forming the band just below the top of the cabinet. The drawers are elaborately textured with a mosaic-like motif that is repeated on the base, just below the pot-board.

The case part of the credenza is made up of four doors, each ornamented with a square moulding. Separating the outer doors from the two central doors is a narrow, vertical panel based on a design of overlapping circles. Uniting the vertical members are stylized flowers in a rectangular frame at the top and as part of the base for the columns supporting the case and rising from the pot-board.

The horizontal surfaces such as the top and the pot-board display the magnificence of the walnut grain and add a warmth and humanizing element to this heavy, architectural piece. Due to age, the pot-board, which is approximately 3/16" in thickness, has curved slightly in its frame.

The hardware is original and the cabinet door comes with a key.

Please note that the difficulty of photographing items of this size can result in color variations. We believe that the truest representation of the color is in the photograph at the top of this page.

This credenza, with its august presence and architectural structure, is ideal for its traditional use in a dining room as a sideboard or in any room where it commands attention and reflects stolidity, artistry, and timelessness.