A Winter's Tale from the Black Mouth of Florence

During my days as a graduate student in Vienna, Florence was my refuge ̶ a sunny Italian escape from interminably gray Austrian winters, a living museum with a great work of Renaissance art around every corner, plus fabulous food and wine well within a student's meager travel budget. 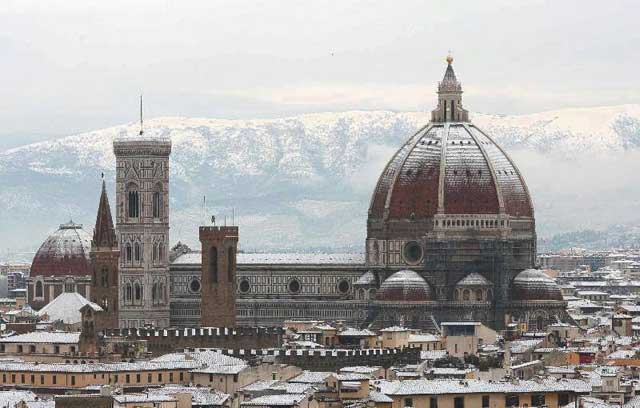 And so it was, after decades away, that I returned to Italy to introduce my husband, Michael, to the joys of the Tuscan capital. Then, as now, I prefer to "eat on the economy" where the local inhabitants go to enjoy what they know is best. Following in their footsteps, we were not disappointed. 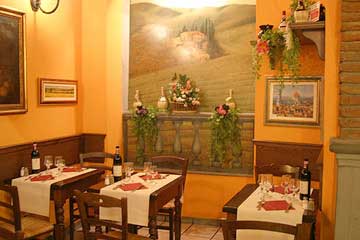 Notable meals included a luncheon of gnocchi in a truffle cream sauce and chicken roasted in fresh herbs at Giannino, near the Church of San Lorenzo and the outdoor market of the same name. But what we remember most about the restaurant was its commitment to Italian carnivores, from the chops on display in the window, to customers chowing down on the biggest T-bones we had ever seen (Texas cowboy steaks seeming puny by comparison). Boisterous, hectic, fun ̶ what else would you expect in a country where people love to eat, drink, and socialize, preferably all at the same time?

The culinary highlight of the trip was, like so many of our favorite experiences, unplanned. We had been invited to visit I Tatti, the villa in Fiesole outside Florence where Bernard Berenson spent a half century in connoisseurship of Italian Renaissance paintings. His dedication to finding and preserving the artistic output of centuries past remains the inspiration for our own antiques business. 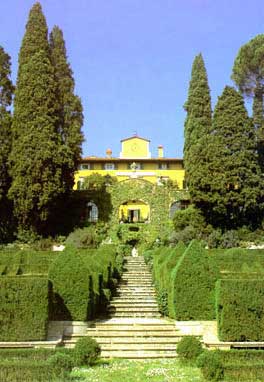 Following instructions, we took the bus to Fiesole, but during the ride the heavens opened. When we disembarked, a cold, windy, and wet hike up the hill to I Tatti awaited us. But it was worth it. Sitting in the great man's living room, surrounded by the furniture, rugs, and paintings he had amassed and treasured, we enjoyed imagining what life had been like in the villa while he wrote his books and helped establish some of the great collections of Italian Renaissance art in the U.S. By the time we left, the rain had stopped but the wintry wind propelled us down the hill. The long wait for the bus meant we were chilled to the bone and famished by the time we returned to Florence.

As we made our way back along the Via Ghibellina to our hotel, the Relais Santa Croce, we noticed that the lights were on at the Ristorante Simon Boccanegra just up the street, across from the Teatro Giuseppe Verdi. The theater was named for the composer of Grand Operas, including "Simon Boccanegra," the story of the first Doge of Genoa elected with the backing of the Ghibelline faction (for whom the Via Ghibellina was named). The family's surname dated back to the 12th century when "bocca negra," literally "black mouth," was accorded an ancestor who spoke evil in a time when black was not only a color but a term for wickedness; an epithet difficult to shed while dogging his descendants for generations.

We had walked past the Ristorante Simon Boccanegra numerous times. Never open, we had concluded it was no longer in business. After all, considering that Simon Boccanegra's reign was cut short when he was poisoned in 1363, potential customers might have been put off by the notion of eating at a restaurant named for him. Any such reluctance on our part was banished by a look at the menu in the window. A snap decision ensued, to make a quick change into some dry clothes and head back there for dinner. 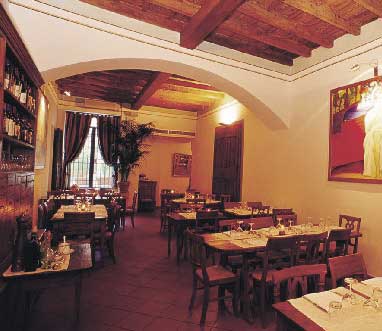 When we arrived around 7:30 (early, by Italian standards), the hostess greeted us and asked if we had a reservation. “No,” we responded as we surveyed a sea of empty tables. Nevertheless, she was insistent that others could be coming and our spot would be needed. So, we volunteered to leave by 9:00 if she would just let us stay and eat in the meantime. A compromise achieved, we settled in for what would prove our most memorable meal in Florence.

The menu at Simon Boccanegra hit all our hot buttons ̶ game dishes, wild mushrooms, and other wintertime delights such as butternut squash and truffles. The wine steward suggested a Vino Nobile from nearby Montepulciano to complement the locally produced ingredients comprising our meal. The wine was exceptional ̶ full-bodied and able to stand up to the game dishes we selected. Delivering a warmth and coziness after our day of chilly travels, the rich, garnet-colored liquid reflected the glow of the candlelight and enhanced our enjoyment of a romantic dinner for two.

Michael started with a porcini mushroom pie with veal sweetbreads and I opted for the butternut squash cream soup with truffles. One taste and we knew that the chef was a genius and that we were in for an outstanding dinner. As the main dish I had wild boar fillet with a balsamic vinegar and shallot sauce accompanied by baked endive. Michael had duck breast with a pomegranate sauce and butternut squash pudding.

While enjoying every morsel, we checked our watches occasionally to see if our deadline was approaching. It came and went without another customer setting foot in the restaurant. Instead, the staff ventured out of the kitchen to chat with us about the food and wine, their commitment to local, fresh ingredients, and their passion for using them in innovative ways. They also prodded us to tell them a bit about Texas and the food and wines we loved from our home state, along with what "Italian" food was like in Houston. When we finally left around 10:30 we had been the only customers that evening ̶ a pity for such a wonderful eatery. But, the hostess assured us, it was always packed on opera nights, especially when Verdi's Simon Boccanegra was playing!

The next day, before catching the afternoon train back to Milan and our flight to Houston the following morning, we went in search of a restaurant I recalled from my travels to the city as a student. Called "Dante," it was located on a tiny square with the equally tiny house where the poet of the same name had lived. I remembered Dante fondly for my introduction to the world of Italian antipasti ̶ a large table covered with at least twenty different dishes from which you could help yourself to all sorts of marinated seafood, vegetables, and other tidbits to whet your appetite. The pasta dishes were generous enough to fuel an afternoon at the Uffizi Gallery or a stroll across the Arno to the Pitti Palace. The desserts had proved simple yet memorable ̶ homemade gelato known as fiocco (or what we would think of as vanilla ice cream but without the vanilla flavor) topped with fresh fruit and cognac. Probably long gone, Dante had been replaced by a plumbing supply store.

Instead, we opted for Birreria Centrale, just across the street. Not being beer drinkers we probably would not have given a restaurant connected with a brewery a second thought. But we were hungry and ready to sit down and relax. The menu was tempting and, when we peeked inside, the mish-mash of antique tables, chairs, and benches proved irresistible. The place was tiny, no wider than the bar behind which we glimpsed a kitchen the size of our bedroom closet. The chairs and benches quickly filled with local diners, all of whom seemed to order the same dish of pasta, ham, sausage, and cabbage in a creamy sauce. Expecting that the portions would be the "normal" size we were used to in Italy, nothing prepared us for the giant plate of noodles in wild mushroom sauce or arugula and green apple salad with what seemed like a kilo of gorgonzola cheese piled on top.

We ate as much as we could, accompanied by generous helpings of refreshingly brisk house white wine resembling an Orvieto (better than we expected from a beer place). It turned out to be a good thing that we had "tanked up" on both food and wine. Our train was delayed for hours, in the middle of nowhere, while the police investigated an accident. But after such a great meal, what’s a little delay, Italian style!

Our visit to Florence reminded us that however much you feel you know a place and imagine things to be comfortably predictable, wine, food, and art can combine to make the unexpected remarkable ̶ whether steaks a cowboy would love, a brew pub in the midst of wine country, or a restaurant named for an operatic hero who met his maker when a meal became a murder weapon.

Next time, Venice, Vivaldi, and a trip to the Emergency Room.

The original version of this article appeared in the Fall, 2010 edition of the Quarterly Newsletter of the Wine Society of Texas, a non-profit organization dedicated to wine education and appreciation.