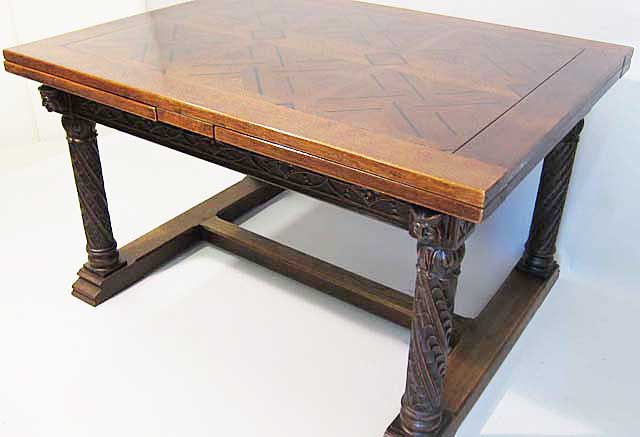 Compared to other Gothic style dining tables form France and made around the turn of the 20th century, this one is truly an outlier. Standard practice was for craftsmen to devote little time to dining table tops because they would always be covered by an expensive tablecloth for gatherings of family and friends. While craftsmen might have finished the central or fixed parts of a top for when it was not in use but still on display in the formal dining room, it was common for leaves to remain unfinished (and to be made of less expensive materials such as pine) since they would only be used when a cloth was covering them. In the case of this table, its top boasts a magnificent inlay design, including the matching leaves that pull out to expand the top to a full 96 inches.

The central part of the oak top consists of two rows, each comprised of three square panels framing an "X" design whose elements are black (ebony). Lighter colored oak members run the length of the table top and separate the square panels. This lighter-hued oak also forms the perimeter. That ebony was used for the inlays speaks to the likelihood that this table was executed as a commission by a master craftsman skilled in creating inlay with this costly, hard, and notoriously difficult-to-carve wood.

Each of the two draw leaves pulls outward from under the table and consists of two square panels containing the identical "X" design so that when they are pulled outward, and the central part of the table top is laid between them, a pleasing and seemingly unbroken expanse results. The shine of the rich lacquer finish on the top and the leaves enhances the viewer's appreciation of this effect.

The pattern of this table's top is not especially Gothic, but the base firmly sets the table in that style. The "H" shape of the stretcher traces its roots to refectory tables in monasteries.

The base itself is fairly unadorned but the legs and the frieze just below the top are full of Gothic ornamentation. Each leg has a pattern of overlapping figures flowing diagonally from top to bottom and reminiscent of the pillars in Gothic cathedrals in the Picardy region of northern France. The legs are crowned by capitals, in a design based on curled acanthus leaves, accentuating the architectural origins inspiration for the table’s design.

On the longer sides of the table, the corners at each end display the carved head of a man wearing a hat with a crease in the front, reminiscent of medieval scholar's felt hat with ear-flaps extended. The expression on the faces is identical and serious. Perhaps this was meant to evoke an ancestor of the owner or was made for a professor of Medieval Studies?

Between the heads and extending to the shorter sides of the table is a frieze of Gothic tracery based on a repeating oval shape framing a central floral design.

This table is ideal for a medium-sized dining room where it should seat 6-8 people when fully extended.