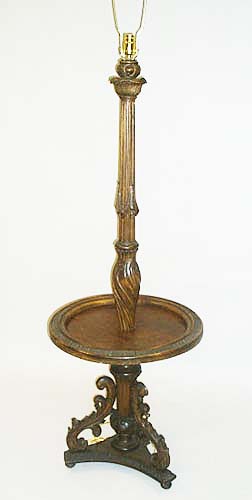 The virtuosic carving on this piece caused us to take a closer look at what is often a pedestrian execution of an everyday object, like a floor lamp. With the advent of electric lighting in the late 19th century, there was a need to replace the rickety little tables that had held oil lamps and candles. They were often circular, and placed next to beds and chairs for the light they held offered the opportunity to read after dark. Such tables had existed before the middle ages, but from that time forward, they began to develop styles and functionality that had been rare before.

The most common shape for the support portion of these tables had been the spiral turning, known as a barley twist in English furniture design and a torsade in French styles. The origin of the "barley twist" description is unknown to me, since barley is not, in fact, twisted, as these spirals suggested. In French design the spiral shape, or "torsade" became a major element of the Louis XIII style. In Christian countries the spiral of the torus, hence "torsade" represented the never-ending or beginning of God. He, like the shape (spiral) neither begins nor ends. And additionally, for Christians the endless nature of the spiral, represents the life everlasting through the acceptance of Christ

In this lamp however there is no spiral, but rather a magnificent column. The top, just below the newly installed socket base, resembles a carved flower, at the top of a tapering and fluted solid oak column. In about the center of the column there are carved trompe l'œil swagged draperies, with tied ropes. Just below these drapes the central column assumes a kind of vase-like shape with fluted spirals of a floral nature.The table is about 23" in diameter, with an incised and raised oak edge, leaving plenty of room for small objects, drinks or snacks. Below the table, the astonishing carving continues with a large fluted ball that is the pinnacle of another vase-like portion of the central column. This is also the joining point for the top and bottom sections of the complete lamp and table. Without a heavy base, the lamp would be top heavy, so the creator of this pieces executed three carved foliate scrolls that attach to the central column for support, and then to the oak base, which sits above three small bun feet.

The condition is extraordinary, nothing missing or broken, and completely rewired for U.S. electrical requirements. It needs a rather large lamp shade for proportional unity.