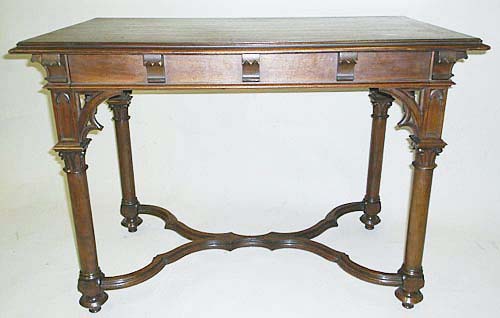 We found this beautiful, small, solid walnut, Gothic side table outside Lyon, and were delighted to do so since small gothic tables are very rare on the market yet so important in today's décor.

The top is outstanding, with no scratches or mars, the result of re-amalgamation of the original finish to bring out the depth and color of the walnut. Over time the wax, smoke and the buildup of other things on the finish can all but obscure the original depth and grain of the wood. Special pieces like this table benefit greatly from the re-amalgamation process.

The four legs are capped on all four sides with carved blanks which have been incised with a Gothic lancet design, and each has a walnut bracket to offer support to the top. Unlike the classic Gothic arch in French architecture, this lancet arch is the double-curved ogee also known as the Venetian arch, with the addition of an indentation where the arch joins the perpendicular elements. The more traditional Gothic arch is found below the top on each side of the table, trimmed with bits of tracery or fenestrage.

The legs terminate in turnings. The stretcher between the legs is delicately carved in a style that is clearly Gothic, but in form is an entretoise ondée (wavy) reminiscent of those connecting the legs of classic Louis XIV chairs. This stretcher is delicate and shows signs of past repair under it's center, but which provides structural integrity.

We suspect that the table's basic structural design (minus the Gothic elements) is based on the table en cabaret of the 17th century - a small table with a drawer, designed for gentile card games such as whist - and which also made use of the entretoise ondée.

Due to its relatively delicate design, this table tends to move from side to side if used as a desk, much as a skyscraper moves in high winds. This movement is not from loose or weak joints, as all are strong and stable. It is just a more delicate table than we are used to, due to its long slender legs and other design elements. It needs to be around adults that understand and appreciate its design, and would be recommended for a location that would not be in a central traffic flow. However it is ideal for an entryway or hallway. Owing to its size, it could also serve as a table between two beds or as a stand-alone table at bedside now that mattresses are taller and therefore closer to the height of this table.