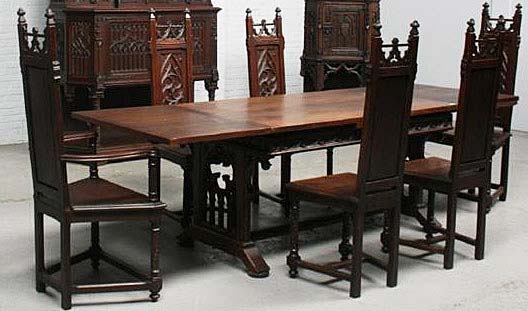 It can be hard to find tables that extend with draw-leaves. When we do, they are typically available as part of a complete dining room. Such was the case with this table, but we are offering it with six armchairs and four side chairs as the accompanying cabinets from the complete dining room set have already been sold.

As dining tables go, it is narrow, as the style in the 19th century dictated, and seems to have been designed to draw diners into conversation across a limited space. This table is particularly rich in its fenestrage or open tracery making up the vertical supports of the base. It reminds us of gazing at the side of magnificent Chartres Cathedral, where tall lancet arches support a circular or rose window. As one of the photos, below, illustrates, looking through the circular “window” at eye level perfectly frames the other vertical support. It is just such a technical feat that delighted cathedral builders and worshipers of old as well as 21st century collectors of Gothic style furniture.

The overall design of the vertical supports involves a rectangular panel surrounding a Gothic or pointed arch. Within the arch are four lancet arches supporting the circle, inside of which is a quatrefoil. Instead of merely coming to a point, the four cusps of the quatrefoil end in three-dimensional trefoils or stylized three-pointed leaves.

The basic theme of arches supporting a quatrefoil is subject to infinite variations, both in architecture and in furniture (including the design of the chair backs in this set). The proportion of quatrefoil to height of lancet arch may be greater, there be more lancet arches of less breadth and they may be taller or shorter, there may be more or less ornamentation within the open spaces around the circle containing the quatrefoil and bordered by the Gothic arch surrounding all the elements. The possibilities are as boundless as the imagination of the creators. Even better is the notion that the 19th century furniture designers had access to Gothic edifices all around them to serve as models, especially if they lived in Picardy, home to great cathedrals such as Amiens, Senlis, Laon, and Beauvais, or were influenced by Eugène Viollet-le-Duc and his treatises on the renovation of Gothic structures throughout France.

Comprising the outer sides of the vertical supports is a graceful outline from the base, curving to a finish under the table top. One can imagine that if an identical table were placed next to it, these outlines would form a crocketed arch uniting the tables.

The theme of the quatrefoil is continued in the frieze just below the top. This time however, the shapes are elongated, horizontally and become soufflets in a rhythmic band of ornament.

The top of the table is a draw-leaf design, meaning that two leaves are attached to long pieces of wood fitting into the frame and, when pulled out, extend the table to its maximum length. There is a slight difference in coloration, between the central table top and the two extensions, but this is likely due to the extensions not being used and so not exposed to light. In the 19th century, this would not have mattered since the table would have been covered by a cloth when used for dining.

The chairs, totaling six, are typical of the 19th century French configuration of two armchairs and four side chairs to go with a table. The armchairs are in the classic caquetoire design with a tall, slim back, trapezoidal shaped seat and stretcher, and curved arms coming out of the back. This shape, also referred to “as in the manner of Tallemouze,” is another charming example of French design evoking food: the talmouse was a triangular puff pastry dating from medieval times but now recognized as the ancestor of the cheesecake. The broad, trapezoidal seat accommodated wide dresses worn by ladies of the 16th century who otherwise had been relegated to stools or window seats (except in the case of aristocracy and royalty) while their male counterparts sat on chairs. The origin of the term caquetoire, however, is a bit sexist to the modern observer and, according to the French expert and collector of Haute Epoque furniture, the late Bruno Perrier, was coined in the 19th century to denote a conversation chair for women (the French verb caqueter means "to chatter” or “to gossip").

The four side chairs mimic the basic shape of the armchairs, minus the arms and with an “H” shaped stretcher instead of the trapezoidal one used for the armchairs. In keeping with 19th century tradition in which the higher the chair back, the more important the person who sat in it, the armchairs are higher than the side chairs. Presumably, the armchairs would have been for mother and father, the side chairs for the children. Corinne Charles includes in her book, listed below, a photo of the Gothic Revival dining room at author Victor Hugo’s home in Guernsey. It illustrates the author’s role of paterfamilias with his chair significantly taller than those of his wife and children.

All six chairs have the same fenestrage or tracery design for the tall, narrow panel forming the back. It consists of a central circular design, containing four ellipses, above three lancet arches. In this sense, it evokes the open tracery design of the table’s base. The uppermost portion is a pointed arch containing two mouchettes or pointed ellipses. Crowning each chair is open tracery in a large, half-moon design divided into two upside-down, crocketed arches. The sides of each chair are crowned by finials.

As shown in the photo at the top of this page, the table expands and will seat six persons comfortably with the armchairs at either end.