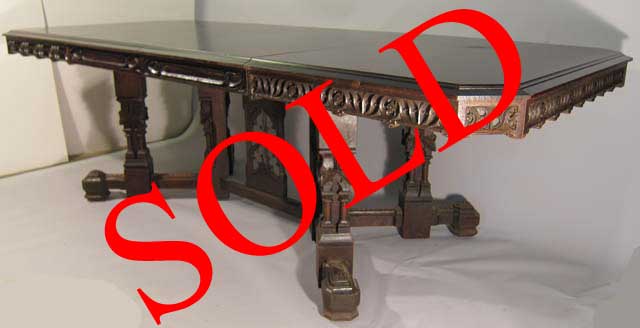 What intrigued us most about this table was the architectural ornamentation in the Gothic style comprising the base. While some variation of an "X" shape is not that unusual, this one has a central panel at the juncture with legs on either side of it and another leg midway into each arm of the "X."

The legs are masterpieces of the carver's art, especially the tiny porticos, complete with columns, Gothic tracery, and a crocketed pediment with an upward pointing acanthus leaf atop its center. Completing each arm of the "X" is an octagon at whose center is a carved fleurette and below which is room for a caster, which we have added.

Uniting the arms of the "X" is a panel with Gothic tracery at the bottom — a simple, pointed arch subdivided by three soufflets or elongated quatrefoils. At the spandrels and the base are acanthus leaves extending from a central stem.

The top of the table is solid oak and surrounded by a wide frieze in the Gothic style. Mouchettes or elliptical tracery alternates with quatrefoils in a pleasing array of decoration discouraging the use of a table cloth.

Throughout the 19th century and up to World War II, it was common for French dining tables to be constructed in one of two ways — with draw-leaves pulling out from underneath or with a framework in the center into which additional leaves could be set. In the former case, the leaves are almost always intact since they are an inherent part of the structure. However, in the latter case, the leaves — sometimes as many as 8 in order to seat up to 20 people — were invariably separated from the table as it made its way from owner to owner. These tables were cumbersome because of the extra frames and wheels that folded up underneath in order to support the heavy leaves when in use.

For a large, formal dining room in today's homes a smaller table without leaves is not adequate. The solution? Craft new leaves matching the original design and materials. In fact, this is a better outcome than if the original leaves were available, since they were rarely of the same wood and were not finished to match the rest of the top. There was no need, since the table would invariably be covered by a cloth when used in its extended mode.

To give this table a new life, our master woodcarver has created two leaves to match the original table top so that the future owners can have the long table they desire but without needing to hide it under a cloth when fully extended. In order to make the extension process work smoothly, the table has been retrofitted with a modern German stainless steel sliding mechanism that can be used easily by one person instead of the two or three needed to wrestle the original system apart. This has added to the cost but makes for a better table and a longer life.

With its renewed ability to gather 12 people around it, this dining table has truly turned over a new leaf.

This table is ideal for a large dining room where it should seat 10-12 people.