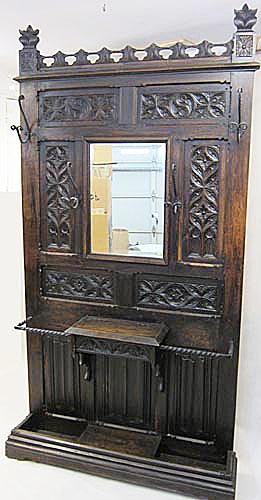 The typical French home at the end of the 19th century would have had a hall tree or portemanteau. In an era without built-in closets (extending to this day), furniture was provided so that residents and visitors had a place for coats, hats, boots, and umbrellas close to the front door of houses and apartments alike. A Gothic hall tree such as this one would have announced the owner’s good taste and devotion to the revival of interest in Gothic design spurred by Eugène Viollet le Duc and his projects such as Notre Dame de Paris and Pierrefonds.

This one has an unusual feature in the form of a built-in shelf at waist level. We like to think that this attribute came in handy for laying down a bag of warm croissants while their purchaser took off heavy winter garb, surrounded by the yeasty fragrance of items fresh from the baker’s oven. This shelf doubles as a shallow box, with a hinged top, in which less perishable valuables could be placed.

We have seen a lot of hall trees over the years but never one as splendidly Gothic and intricately carved as this one. The tracery or fenestrage is exquisite in the ingenuity of the shapes and the overall design they comprise. The central mirror is framed by two horizontal panels of tracery, at the top and bottom, and by a vertical panel at the left and right. The theme of quatrefoil or four-sided shape is seen in variations including one where the four lobes are elongated into mouchettes. These elliptical shapes join, in turn, to create the arch shapes seen on the front of the shelf. Especially unusual is the circle at the center of the panels above the mirror, containing an abbreviated mouchette in which one lobe is itself circular.

The top of the hall tree projects its architectural heritage with open tracery consisting of trefoils alternating with finials. At either end of the top is a block filled with the stylized rectangular blossom marking intersections of everything from decorative mouldings to seats and bases of chairs in the Gothic style. This is crowned by a finial in the shape of a flame, reflecting the flamboyant Gothic fashion of the late Middle Ages.

The bottom part of the hall tree includes three panels in the linen-fold or pli-de-serviette motif. The two on the outside are more elaborate in terms of folds than the central panel but all are beautifully carved.

Hardware consists of four metal hooks, two on the outside upper part of the hall tree and two closer to the center, and a railing on which to hang that indispensable article of Paris kit – the umbrella. Although absent here, a brass pan is typically found in the trough on either side for holding umbrellas without leaking into the wood base.

There is some minor cracking and scuffs on the base moulding. It too is elaborate in terms of the scallop pattern at the bottoms near the corners, still discernible after all these years.

This hall tree would be a welcoming force in any home and the ideal means to signal a love of Gothic style both to residents and visitors.