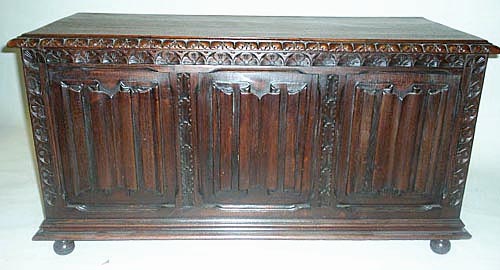 This chest is a late 19th century interpretation of Gothic style with a decidedly Breton flavor. Although from the front it proclaims its Gothic heritage in the three intricately carved linen-fold panels (plis-de serviette), the rest of the decoration more closely resembles traditional Breton design. When viewed from the side, however, the repeated patterns of circles with geometric components, intersecting and tricking the eye into thinking of stylized flowers, are pure Breton. The floral theme is seen again in the patterns of stylized acanthus leaves framing the linen-fold panels and just below the top where three-quarter flowers resembling North American dogwoods form a frieze.

Chests based on the linen-fold panel design became popular in the 15th century in Northern France and were made of oak, as is this one, rather than the walnut reserved for chests with more elaborate carving based on Gothic tracery or fenestrage. Two such chests (items 30 and 40) were sold at auction in Paris in 1993 as part of the haute époque collection of Bruno Perrier.

The wide moulding surrounding the base of the chest, supported by bun feet, combine to yield a pleasing sense of balance and symmetry in what is, by French standards, a fairly small chest. As with so many 19th century pieces evoking the Gothic style, this chest is made of oak and stained a rich, dark brown. Despite the dark color, the depth and grain of the wood is visible and the top is particularly beautiful. The interior of the chest is also finished in a dark stain and is in especially fine condition.

As with all chests, this one is susceptible to a wide variety of locations such as the foot of a bed, under a window, in an entryway, or against a wall in virtually any room of a home or office. It is particularly suited to the addition of a cushion for seating, since its structure is so solid. Mixing antique and modern, the sturdiness of this chest would make it a wonderful platform for a wide-screen TV.