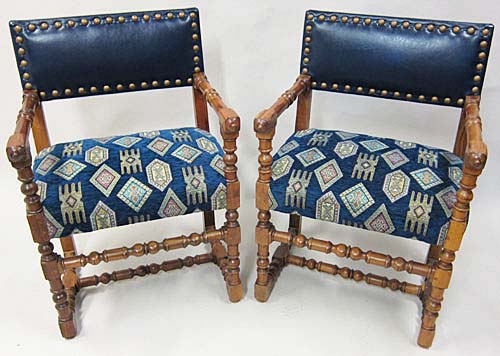 We currently have in stock several Louis XIII style armchairs made in France in 1990 from old, reclaimed walnut. The age of the walnut is not possible to determine but we believe it is at least 200 years old because of the extraordinarily fine grain and rich patina. Like the 17th century models from which they were copied, the construction of these chairs is faithful to the originals, using top-notch joinery designed to last for centuries rather than modern glues and brackets. As with almost every aspect of the antique business, serendipity is responsible for our acquisition of these chairs. We happened to come upon a four-star hotel being remodeled and were able to purchase the chairs right from their home base.

Because they were made so recently from old, solid wood, they are sturdy and stable as well as delightfully comfortable despite years of loyal service in one of Paris' finest hotels. While this style of chair had its heyday during the reign of Louis XIII, its simplicity, comfort and portability have made it a highly popular and enduring design for the 21st century. In common with its forebears, our more modern versions have simple lines with vertical posts running from the stretcher up to the armrest in front and running the entire height of the back. The back posts curve slightly away between the seat and the top of the back to ensure maximum comfort. Faithful to the early 17th century design, the vertical members at the back are unadorned while all the other structural members, including the "H" shaped stretchers, are made up of rounded turnings but with rectangular shapes where the structural members join.

The chair on this page has been recovered in muslin and a pair of chairs has been covered in blue synthetic leather and an oriental rug pattern matching that of Bench 9302.

These chairs are ideal as occasional chairs in a living room, library, den or foyer. They would also work well in an office, for example, for guests to be seated opposite a desk.