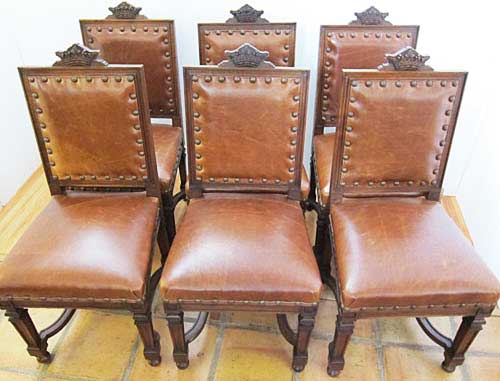 Leather dining chairs from France remain among the most popular items we sell, especially when made of walnut. Sets of 6 or more are almost impossible to find and so we feel lucky to have snared this regal set with a crown topping the back of each chair.

In overall design, the chairs exhibit architectural elements from the French Renaissance such as the rectangular "sandpile" figure at the intersection of leg and seat. They are decidedly rectilinear except for the crown and the curved elements of the "H" shaped stretcher comprising the base. Slightly wider than the typical French dining chair of the era, the seat, legs, and back are sturdy, giving off a sense of solidity and timelessness. Topped by a crown, each becomes a mini-throne for the diner.

The crown itself is typically French with a flower in the center and partial flowers on each side. It appears to be a stylized forget-me-not, the blossom of choice for royals signaling steadfastness to their subjects. Between the blossoms is another flower, this time the stylized fleur-de-lys made up of three small balls instead of petals. The circlet part of the crown is carved to mimic precious stones that would have been set along the perimeter of any monarch's coronet.

The richly colored brown leather chosen to upholster these chairs lends a certain ruggedness in blending with the walnut frames and in complementing their hue. This is in stark contrast to the ragged turquoise-colored leather that these chairs sported when we first spied them. In addition to recovering in premium aniline-died leather, the chairs have been rebuilt with new padding and springs added. The use of circular decorative nails is in the spirit of the late 19th century upholstery techniques but are of modern manufacture.

These chairs are ideal for a large walnut dining table such as item 4110.