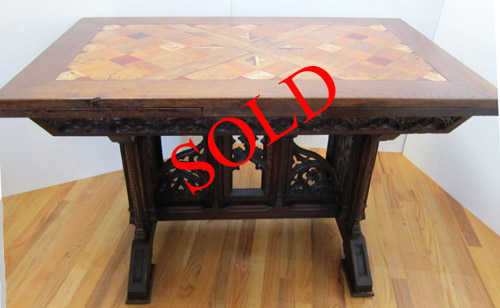 It is unusual to find a dining room table, chairs, a cabinet, and a stool all made from the same wood and still together after more than a century. These pieces were all attributed to Camille Albert, the disciple of Eugène Viollet-le-Duc whose efforts to save and restore the medieval monuments of France led directly to creation of the Neo-Gothic style of architecture and furniture in the 19th century.

Albert was active in the late 19th century as architect of the city of Fécamp, a port in Normandy known for cod-fishing and for distilling Bénédictine Liqueur after the long-lost 16th century recipe for the elixir was rediscovered in 1863. The Palais Bénédictine was designed and built by Albert in a combination of Neo-Gothic and Neo-Renaissance styles for the owner of the distillery, Alexander-Prosper LeGrand. Still used for production, the Palais also includes a museum of art works from the 14th to the 16th centuries. The pieces described here were all acquired by us in Fécamp.

Offered are the dining table, which extends to seat six or more comfortably, along with six chairs (two armchairs and four side chairs). All, together with Cabinet 4190, appear to be made from the same oak, perhaps the same tree. We speculate that the furniture was crafted from trees felled during one of the hurricanes sweeping across northwestern France and the British Isles, such as the Great Storm of 1850. From contemporary accounts, we know that landowners often kept the felled trees to dry out and to be used for furniture and homes, replacing what was ruined in the storms and as an early form of recycling.

Examining the oak comprising this table and six chairs, we find it uncommonly dense with little grain visible, signaling that the oak trees must have been ancient and a part of the landscape for centuries. There are a number of knots and other anomalies that would have been shunned by the typical 19th century artisan as too challenging to work with. Here they are embraced, leading us to believe that the oak from which this furniture emerged had a special place in the hearts of its owner and maker. Perhaps after centuries in a pasture shading the cows responsible for Normandy's memorable butters and creams, the fallen tree lived on with its family at the center of meals and celebrations as a treasured set of dining room furniture and a reminder of the power of nature, despite man's efforts to tame it.

Turning first to the table, its design is based on the trestle table of medieval and Renaissance times whose overall structure involves a base in the form of an H-shaped stretcher upon which is built an elaborate, central vertical member. The table top is mounted on the base, using a frieze to mask the draw-leaf extensions. We are very fond of this design because it involves extensions that match the rest of the table and are inherently part of its structure, rather than using supplemental leaves that are invariably lost or made of inferior wood with the expectation that the extended table would always be covered by a cloth.

The base of the table is made of this dark, dense oak and reflects a basic Gothic design (as shown on page 98 of Viollet-le-Duc's treatise cited below) on four elongated feet into which lancet arches have been carved. The vertical member consists of a central, rectangular frame within which a crocketed ogive arch has been carved, the crocketing in the form of broad grape leaves rather than the tiny, narrower leaves usually performing this function. Framing the central panel are corbels turned on their sides and containing intricate fenestrage or open tracery in the style of Gothic architecture, especially windows.

Another unusual aspect of this design is the broad, perpendicular panels at each end of the base, containing their own richly detailed tracery. Most tables omit such panels completely or offer less elaborate decoration, considering that they are under the table and likely to be obscured from view and appreciation. Framing these panels, and the base itself, are pilasters decorated in the sweeping diagonal design so beloved by the creators of Gothic cathedrals.

The frieze surrounding the top of the table involves an intricate design of half-moon shapes in a fenestrage style with central sprays of vegetation. Considering the hard, dense oak from which the frieze is carved, we marvel at the intricacy achieved and are reminded of the magnificent carvings out of granite, that hardest of stones, at the abbey of Mont-Saint-Michel at the other end of the Normandy coast from Fécamp. It would have been easier, faster and cheaper to leave the frieze fairly plain, but the maker of this table must have been determined to craft a monument to his skill, for the ages.

It is in describing the top of the table that we leave behind all notion of the Gothic and see a more 19th century approach to furniture and its aesthetic. Back in medieval times, a table top was rarely seen. It was designed to be covered by textiles, whose value far outweighed the humble furniture on which they were displayed, symbolizing the wealth and prosperity of the owner. By the 19th century and the advent of cheaper, factory-made textiles, the situation had reversed and it was the furniture that was more highly valued. Therefore, the table top deserved a virtuosic turn and, as here, is literally over-the-top.

The top consists of an oak frame, the wood being lighter in color, and with broader grain than the base of the table. A central "X" pattern of oak divides the balance of the top into two triangular and two pentagonal sections filled with squares and rectangles of contrasting woods (mahogany, walnut and either birch or poplar), with two-toned fleurs-de-lys (of walnut and either birch or poplar) as the focal points. This ornate collection of contrasting shapes and colors is solid (not veneer), highly pleasing and makes the table top a work of art in its own right.

The top extends at each end, but the extensions are in plain oak rather than the patterned treatment of the main top section. To protect against warping of the top, a metal reinforcing framework has been added but covered in felt to keep from scratching. While there is still a very slight warp to the top, this is likely inevitable, considering the age of the table and its solid construction from different types of woods.

The two armchairs designed for the ends of this table are remarkable in several ways. First, the seats are higher than the other chairs, keeping in mind that the extensions of the table, where these armchairs would be placed, do not have a frieze below them. Therefore it could be more comfortable for the persons sitting in these chairs to be slightly elevated. Or the objective could have been a simpler one - to elevate the persons in these chairs above the rest of the diners, reminiscent of the medieval practice of seating those of noble rank on a level above their inferiors. Crowned with elaborate finials, these chairs in a basic trapezoidal or caquetoire design take on the essence of thrones for the heads of household.

In keeping with the medieval belief that only God was capable of perfection or could make an exact duplicate of anything, all of the chairs share a unifying structure but each of the tracery designs of their backs is different. This involves some of the most intricate and finely carved tracery that we have ever encountered, especially remarkable for it being oak instead of the more easily carved walnut. Each chair merits contemplation for both the virtuosity of the carving and the way it complements the other chairs. All involve some variation on the basic, circular, rose window design from Gothic cathedrals, but with ingenious variations and open-work reflecting the wealth of stylistic elements available to Gothic designers and their 19th century re-creators.

It is hard to imagine a more well-matched table and chairs reflecting the pinnacle of Gothic design. Sturdy, intact, and with a magnificent patina, they beckon future generations dedicated to this triumph of 19th century craftsmanship -- harking back to the style of the time when the tree, from which they were fashioned, was but a sapling. 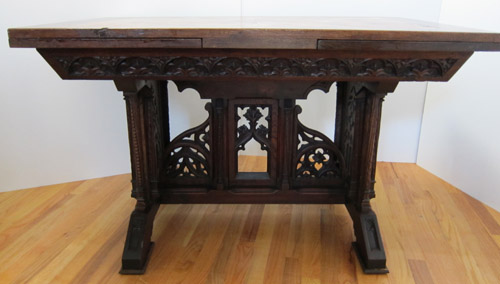 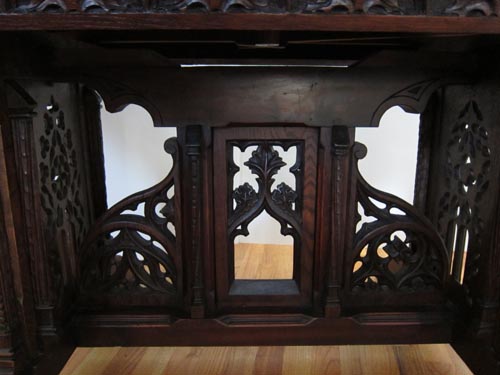 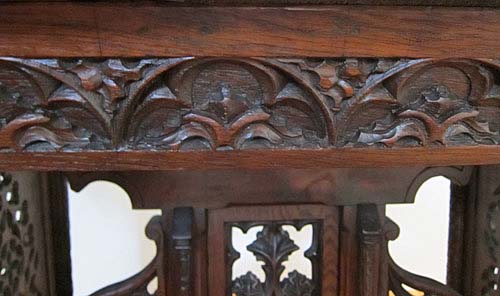 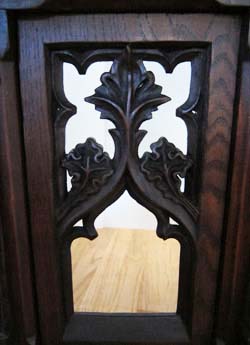 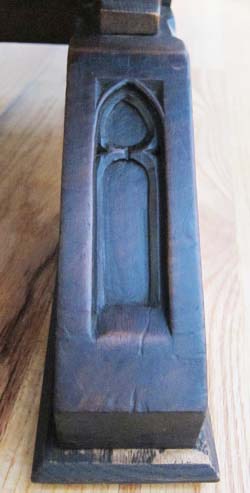 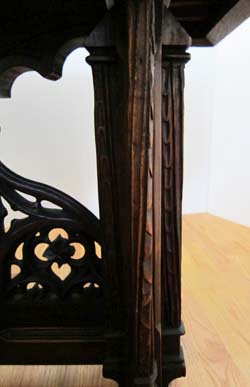 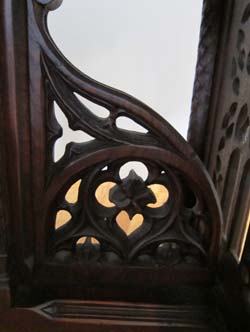 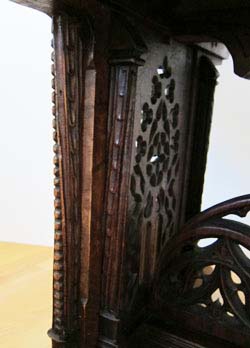 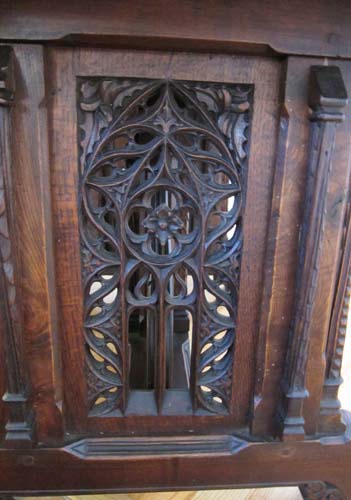 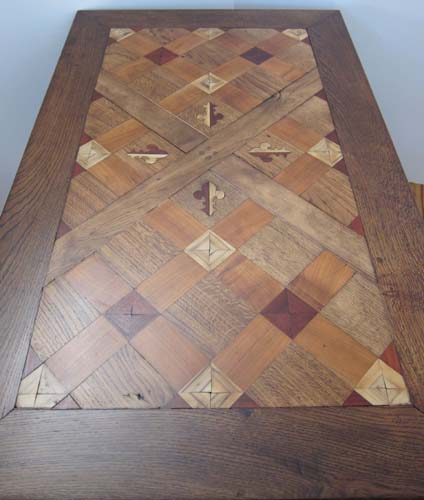 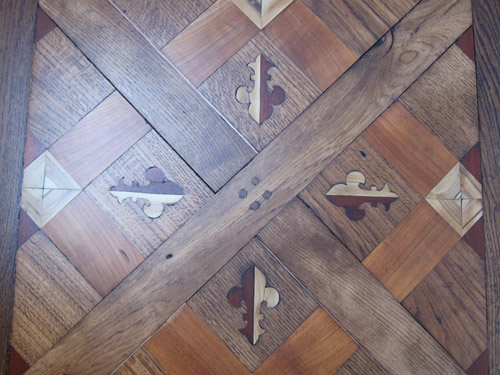 This set of table and chairs deserves pride of place in a dining room where families gather and friends are entertained for decades to come.