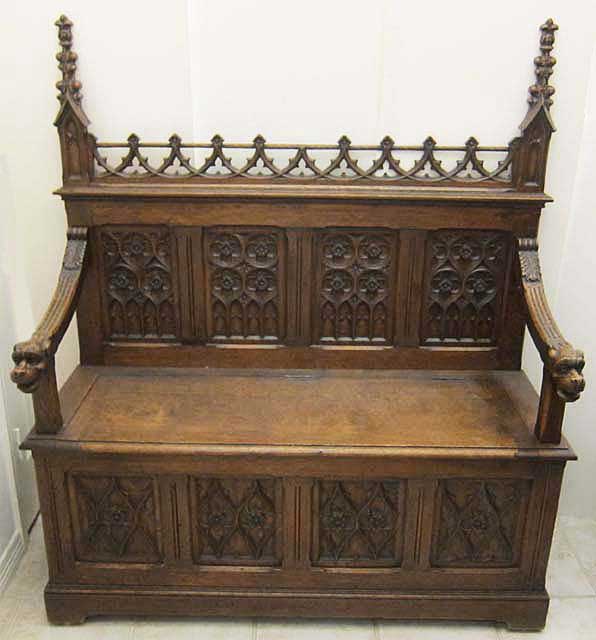 Benches remain among the most popular forms of furniture in the style of French Gothic Revival, and it is no wonder. Not only is a bench an inviting canvas for the master carver to work his magic with elements of gothic design, but it harks back to the middle ages as a comfortable form of seating and a practical form of storage. In the process, it validated the status and good taste of its owner.

In chateaus, the vestibules or entry areas were typically ringed with benches, heavily carved and often covered in pillows made of luxurious fabrics or draped with tapestries or carpets. Benches were also used in the bed chamber, frequently near the fire, in order to block drafts and increase warmth, as illustrated in the treatise by Eugène Viollet-le-Duc (cited, below). They were also used as seating at tables in the main hall of a chateau.

The skillfully carved fenestrage or tracery on this bench includes four panels above the seat and four below it. The panels at either end match each other as do the two in the middle.

The four panels above the seat are based on a design involving lancet arches supporting quatrefoils framed by circles or elliptical shapes. In the center of each quatrefoil is an intricately carved blossom, a design also used to fill the space between the tops of the lancet arches and the frames of the quatrefoils.

The four panels comprising the front of the base of the bench involve tracery without lancet arches.

As with the top, a theme of the tracery is the quatrefoil but this time each one is contained in an elliptical-shaped frame tapering to a point at top and bottom (just as the quatrefoil does). The two panels at either end have only one quatrefoil at the center but the hint of ones, divided in half longitudinally, on either side. The two panels in the middle each have two of the tall, elongated quatrefoils. Tracery designs based on triangular shapes fill the balance of the empty spaces on these panels. Unifying the design with that of the panels on the upper part of the bench, the blossom is at the center of each quatrefoil.

On the ends of the base of the bench is yet another tracery design unique from the others. Two quatrefoils are framed with circles but lack the blossom in the middle as on each of the panels that face forward. Four tracery figures are contained in a central, oval shape — two quatrefoils and two mouchettes or curved figures ending in a point on one end. Blossoms separate this central shape from half-moon figures on either side.

Crowning the upper part of the bench, above the four tracery panels, is a railing in a half-moon design united by a horizontal piece of oak at the top of each semicircle. The upper tips of these semicircles are punctuated by a smaller version of the carved blossom found at the center of the quatrefoils in the panels shown above. The blossom for the center-most point is missing and has not been replaced.

At each end of the railing is a finial or spire sitting atop a square column into which a lancet arch has been carved. In design, they are fairly simple. The central spire is ornamented with crocketing (stylized, furled acanthus leaf) on either side. The top of the spire has a slightly broader top ending in the shape of a fleur-de-lys.

It is when we look at the armrests of this bench that we find its most captivating figures, especially for dog-loving antiques dealers such as ourselves. The end of each armrest is carved to show the head of a dog, complete with expressive eyes, detailed muzzle, and ears flattened back against the head. Each head is slightly different, imparting a distinctive personality to the pooch.

Viewed from above, the detail of the dog's head makes it almost impossible not to pet it.

Where the armrest meets the back of the bench, there is a graceful scroll design unfurling into an acanthus leaf.

The door to the bench's storage area runs almost the full width of the seat, providing ample storage space for pillows or other items to adorn the bench.

Overall, the bench is in very good condition. The oak has developed a rich patina with the grain visible yet muted.

Whether guarding an entryway, at the head of a table, or in any room of a house, this bench stands ready for several more centuries of enjoyment by lovers of Gothic furniture.