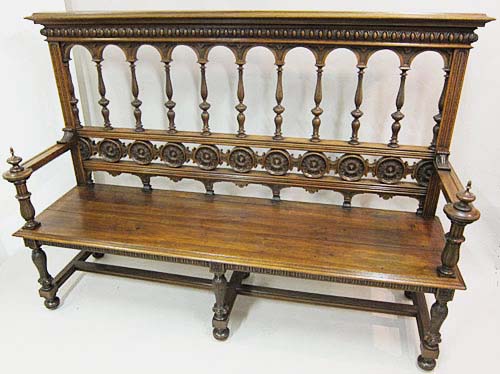 This unusually large walnut bench displays a wealth of Renaissance decorative elements in a pleasingly architectural design. The overall construction is based on a rectangular seat atop H-shaped stretchers with perpendicular balusters supported by bun feet. The turnings of the legs include a boule aplatie, a sort of flattened bun shape featuring the same vertical gadrooning as on the frieze on the upper part of the back. The back itself consists of ten arches above circular floral medallions, most likely sunflowers, whose petals are intricately carved. The flowers' petals are repeated as decoration in the five supporting arches forming the base of the back of the bench and atop the armrests where they join the back.

Indeed, it is in the choice of stylistic elements adorning this bench that we sense the enthusiasm of the 19th century French craftsman for the Renaissance and its decorative vocabulary of nature - feathers, palm leaves, sunflowers. We can imagine this bench on a stone terrace overlooking fields of fragrant lavender in Provence, where the arcature comprising the back is reminiscent of the Pont du Gard.

The vertical posts framing the two sides of the back are carved in elongated feather motifs, a shorter variation of which is found in the alternating palmettes on the frieze just below the seat. The origins of the feather motif combined with arches can be found in a sixteenth century walnut armchair shown on page 291 of Jacqueline Boccador's book on Medieval and Renaissance furniture (cited in References, below).

A delicately carved palm leaf forms the decoration for each of the six broad balusters supporting the seat and for the two supports for the armrests, as well as for the narrower balusters framing the ten arches of the back. We believe the toupies inserted in a hole atop the armrest at each end of the bench may be later additions. The vertical post forming the left side of the back has had some insect damage on the part which would not be visible if the bench were up against a wall (see photo, below). Fortunately, the infestation occurred long ago and does not affect the structural integrity of the bench.

Owing to its age, several splits have occurred in the seat, as shown in photos below, but they do not impact the bench's structural integrity or the ability to sit comfortably on it. Finally, the overall color of the bench is blond or light walnut, having a rich patina that brings out the contrast and beauty of the intricate carving. Despite its heft and solid construction, the open back and rhythmic arches combined with the delicate carving of feathers and palm leaves result in a graceful, seemingly weightless yet comfortable seat for the ages.

This bench is particularly apt for an entryway or patio where it can command attention and invite appreciation of the intricate carving and richness of the light colored walnut.