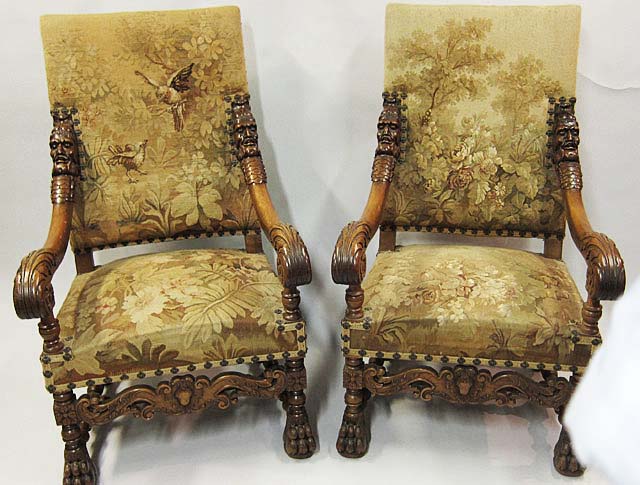 We are usually confident about our stylistic classification of furniture from the moment we spy it in France until it appears on our website and finds a loving home in the U.S. But these chairs have us flummoxed. They display elements of both Louis XIII and Louis XIV styles, as re-interpreted in the19th century, and it is obvious that their maker adored both styles as much as we do. And, while we typically don’t buy items with flowery tapestry upholstery, it works so well on these chairs that we’re glad we made an exception.

The Louis XIV upholstered armchair is likely the most enduring piece of furniture design from a reign when “over-the-top.” “larger than life,” and “exuberant” were adjectives describing furniture and decor fit for the Sun King. In his day, only the upper echelon of courtiers was permitted to sit down on benches and only the most elite among them on chairs having backs. So coveted were these perches that the broad chair with high and gently sloping back atop a base of curved cross-pieces took on the moniker “Louis XIV."

These chairs morphed from the more diminutive model used in Louis XIII’s reign – and still named for him – with a smaller base made of wooden turnings framing the perimeter. Instead of curves and slopes, everything was rectilinear and smaller in scale, but beloved to this day (as seen in the ones we bought from a Paris hotel that adopted and later abandoned the Louis XIII theme).

It’s all about curves becoming the norm in Louis XIV’s era, as well as during the style’s 19th century comeback, with curved legs, armrests, and even the occasional curved top of the back. That these chairs have the high-back design and curved armrests of Louis XIV but the rectilinear base atop lion's paw feet of the Louis XIII style add up to the best of both worlds and a pleasing mélange.

What initially captivated us about these chairs were the intricately carved faces, placed high on the armrests at the intersection of the chair back. While it is not uncommon to see masques or grotesque visages on chairs, they are typically at the center of the back or at the end of the armrests. To see them as here is exceptional, as is the manner in which the figures are rendered. Long, slim faces with prominent eyebrows, cheeks, and lips, these are not the refined and exquisitely proportioned masques of Renaissance design reinterpreted in later epochs including Louis XIII and Louis XIV. Could their purpose be to evoke some fantastical creature lurking in the dense vegetation depicted in the tapestry? Lengthy and narrow, to fit within the overall shape of the armrest, these faces framed by topknot of hair and fringe of beard remind us more of faces on the tall, slim figures doubling as columns on porches of medieval cathedrals. The prominent teeth are a puzzle and perhaps a nod to the person who commissioned these remarkable chairs?

While the scene depicted on the back of each chair is different, they are part of the overall tapestry design. Although the fabric is at least 70 or 80 years old and may even be original to the chairs, it is still in remarkably great shape and unlike anything currently available in the workshops of Paris. The scene on the left chair is an enchanting interaction between two birds, possibly parent and chick. On the right chair, the scene evokes the verdure style of tapestry popular in the late Renaissance when vegetation was depicted but animals and humans were absent. Both are atmospheric, evoking a gauzy and untamed wilderness of plants and flowers and a warmer clime to which residents of chilly France might escape.

The base of these chairs is especially lovely in the intricate carving of the cross-piece. We’re unsure if the central design on the front, a sort of inverted pear, is heraldic in nature or purely decorative but it is intricately and beautifully rendered even if a bit difficult to admire when seated.

The tapestry fabric appears to be original in its overall golden color highlighting birds and flowers. There is some minor deterioration in the fabric at the back of one of the chairs (as shown below) but this is not evident when viewed from the front nor does it impact the structural integrity of the upholstery. Oddly, the fabric covering the upper backs of the chairs (shown below) is not the same color, which should be borne in mind if the chairs will not be displayed with their backs against a wall. The cross-shaped decorative nails are unlike any we have ever seen and we expect that they are original.

The rich, golden-brown patina of the walnut itself provides a sense of warmth while acting as the perfect complement to the tapestry fabric and contributing to the overall sense of brightness and beauty that these chairs exude.

These chairs would be ideal for an entryway or on either side of a Renaissance style cabinet. Comfortable yet formal, their coziness ensures decades of future enjoyment whether by royals or mere mortals.