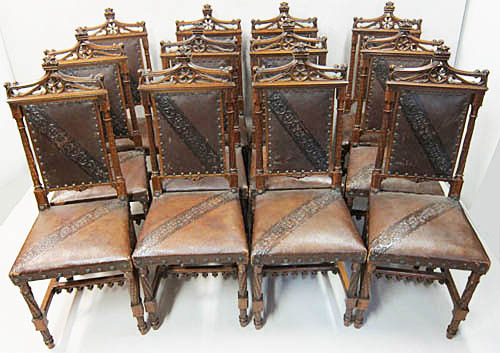 It is rare to find twelve matching dining chairs from the 19th century, and then for them to be upholstered in leather and made of walnut instead of poplar or beech.

In form, these chairs are classic examples in the Gothic style made up of a back panel framed by columns and topped with an arch. The seats are trapezoidal and supported by an H-shaped base. And while their structure is simple their ornamentation is more complex.

Each chair is topped by a broad ogive arch coming to a point at a finial in the form of a flame. This characteristic means that their overall style can be described as “flamboyant” Gothic, from the French term flamber (to flame). Within the arch are other forms from open fenestrage or tracery typical of Gothic style, including the elliptical-shaped mouchette and the central circle divided into six lobes. At the top of the sides of the arch are beautifully carved crockets -- delicately curved, compressed acanthus leaves typically seen on spires of Gothic buildings.

The columns framing either side of the chair back’s central panel and those comprising the two front legs are ornamented with a diagonal pattern of interlocking scales reminiscent of columns inside Gothic cathedrals.

The H-shaped stretcher forming the base of each chair is more elaborate than we typically see. On the underside of the cross-member are repeating arches with tiny inverted trefoils at the ends, reinforcing the Gothic flavor of the stretcher and mirroring the arch at the chair’s top. The placement of this engaging detail is somewhat hidden but therefore unlikely to be damaged when people are seated in the chairs.

Typical of 19th century furniture, these chairs include elements of Renaissance style within an overall Gothic theme, reminding us that there was often a blending of elements from the period that the French refer to collectively as the Haute Epoque. In this instance, we are referring to the elaborate and original leather coverings on these chairs. The design involves diagonal, decorative bands going left to right down the chair back and then going right to left from the back of the seat to the front. These bands are filled with alternating elements, of quatrefoil and cartouche, reminiscent of ornament popularized by the Gien ceramic works in their line dedicated to the style of King François I and his Renaissance château at Fontainebleau.

The leather is attached to the chairs with intricately shaped decorative nails that are also original. There are some wear spots and stains on the leather but the condition is generally good for chairs of their age. The back of one of the chairs has a torn spot (shown in the photo, below). Prior to shipment to their buyer, a museum-quality leather reconditioner will be applied to all 12 chairs.

These chairs are ideal for a large walnut dining table such as Item 5130.