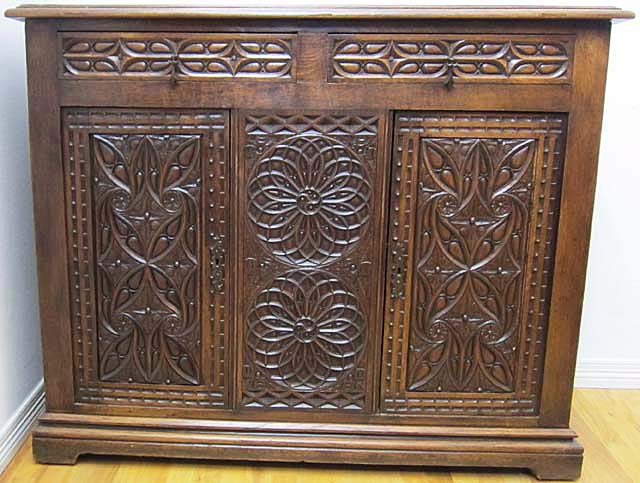 This antique buffet cabinet comes from northern France and reflects high gothic stylistic elements such as fenestrage or tracery -- the use of motifs seen in stained glass windows. The motifs of the central panel are reminiscent of the rose windows used in gothic cathedrals and are especially remarkable for the intricately carving -- a triumph of geometry and carving skills.

Quite unusual is the inner circle representing the Trinity – a circle filled with three tiny mouchettes or elliptical shapes wound tightly and showcasing the carver’s skills. The intricacy and grace of these gothic elements lend a lightness and intimacy to the piece similar to that experienced inside the masterworks of Gothic architecture such as the Sainte Chapelle in Paris.

The panels comprising the doors on either side of the central panel (which does not open) are feasts for anyone accustomed to indulging in the banquet of Gothic design. Particularly interesting are the intricate details of mouchettes and flowers framed by corbels with intricate line motifs and circles evoking the Breton heritage of this cabinet and lending almost a folk art and mystical spirit to the design.

Dating from the 19th century when the Gothic revival movement swept through Europe, the cabinet has two doors and two drawers. Particularly distinctive are the metal drawer pulls in the shape of ermine tails, the symbol of Anne of Brittany (second wife of King Louis XII), who incorporated this motif throughout the Perche aux Bretons wing of the royal chateau at Blois.

In keeping with Gothic Revival design, the sides of the cabinet are each comprised of two linen-fold panels. These panels are especially rich in their relief and modeling, symbolizing the strength of this design motif beyond any notions of mere filler seen in less enchanting examples of furniture from the 19th century revival of Gothic style. For anyone loving Gothic design elements, this is the pièce de la résistance.

The cabinet is ideal for a living or dining room, but is also adaptable for a bedroom or study.