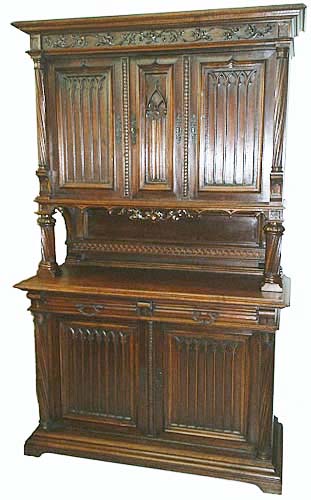 This solid walnut, Gothic style buffet cabinet is loaded with carved details that would excite any Gothic-lover as well as holding all of the table settings and linens.

The base of the cabinet has two doors and two drawers. The face of the drawers is the familiar linen-fold design, and they have solid brass, original handles that are beautifully detailed. The two doors have Gothic arched fenestrage on their fronts, that recall the windows of France's magnificent Gothic cathedrals. There is a single shelf accessed behind the doors that runs the width of the cabinet. The doors are framed by two twisted and fluted columns in the gothic manner, that support the top as well.

Above the base's top, is the intermediate, supporting section. Again there are two twisted and fluted columns, that this time have floral capitals. In the center under the top is a carved acanthus leaf motif, with stylized acanthus leaves that become downward, pointing Gothic arches.

The top part of the cabinet has a pair of doors that mimics the lower pair, except that the right-hand door has a center linen-fold panel with a gothic arch, that makes it about 12" wider than the left-hand one. Just below the architectural crown moulding at the top, is another acanthus leaf motif comprising a frieze the width of the top.

Inside a label is mounted, indicating that the maker is the legendary French furniture firm Mercier Frères. The company was in the forefront of all the major furniture styles from the time of its founding in 1828 and for over a century thereafter in the heart of Paris' furniture district, the Faubourg Saint-Antoine. Extremely successful, the firm even opened branches during the 1920s in Buenos Aires and New York. Items in the Empire and Art Nouveau styles are especially prized and still sell for top-dollar at Sotheby's and Christie's. While it appears that Gothic Revival was not among the styles produced in large quantities, to have found an example is thrilling. As to dating this cabinet, we know it cannot be older than 1867 when the Mercier company first adopted the name "Mercier Frères." We estimate that it was made around 1890 when the Gothic fashion was at its height in Paris.

What attracted us to this cabinet was not only the intricacy and refinement of the hand-carved elements but the rich, dark patina of the walnut.

This buffet cabinet is a rare and outstanding example of the best in French Gothic Revival furnishings and would command attention in a dining room or, as in the current trend, in an executive office as a combination credenza and bookcase.