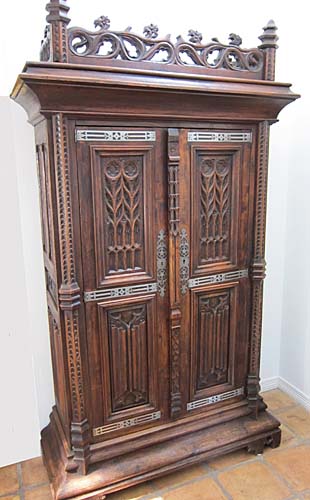 This armoire is one that, the moment we first saw it, we knew that it was a beautiful example of Gothic styling. But it wasn't until closer examination that we discovered its rarity - it is made from solid chestnut. While resembling some pieces of oak in its distinctly wide grain of the wood (and often misclassified by dealers), chestnut is a somewhat softer wood and its grain is richly varied, with the contrasting portions wider and more accentuated.

The chestnut trees in the temperate areas of Europe were introduced by the Romans and planted to assure a reliable source of nutrition during long-term occupations when crops of cereal grains might fail. Until the potato was introduced from the New World, chestnuts were a staple and an excellent source of carbohydrates in Europeans' diets. As other sources of carbohydrates became more popular, cultivation of chestnut trees for their nuts declined as did the supply of chestnut trees for use in furniture.

There is more about this at the Musée de la Chataigneraie (Chestnut Grove Museum) in Beaumedrobie in the Cevennes area of south central France (overlapping with the Ardèche). For more about chestnut-oriented travel and the Cevennes National Park, see a recent article in English in France Today.

We love chestnut wood for furniture because the natural color is lighter and somewhat more reddish than oak and the ability to see the rich grain of the wood persists, even when it has been stained. Because the wood is less hard and generally younger than oak, it is easier to carve (more akin to walnut) and to embody the exuberance of the sculptor's imagination. Therefore, furniture made from chestnut offers the best of both worlds -- a rich and varied grain like oak and a susceptibility to intricate carving like walnut.

This armoire boasts both of these qualities in an array of interesting Gothic ornament amidst unadorned sections of wood displaying the chestnut grain to full effect. The upper part of the two doors making up the front are carved with tracery (fenestrage) patterns we have never seen before. Each has four lancet arches above four rounded arches. These give rise to two flower-like shapes with quatrefoils at the top, resembling a blossom, and leaves made up of elliptical mouchette patterns. Below these panels are plis-de-serviette designs unusual for the depth of relief and that they involve intricate trefoils at top and bottom.

The panels on the upper parts of both sides of the armoire also involve fenestrage patterns, but completely different from the door panels. Again the stem and blossom theme is used but this time set within larger elliptical shapes, undulating upward from pairs of pointed, rather than rounded, arches. Separating these panels from the plis-de-serviette panels below is a band of tracery involving mouchette shapes.

As if all this were not enough, the armoire is crowned by an intricately carved railing of open tracery or fenestrage on the front and sides. It is also in the details of this carving, and that of the base, that the skill of the artist shines through in intricate details and flourishes.

The interior is fitted with four shelves. The aluminum hardware comprising straps and escutcheon plate may be of a more recent vintage. The armoire locks with a beautiful, decorative key.

Please note that the difficulty of photographing items of this size can result in color variations. We believe that the truest representation of the color of this armoire is in the photograph at the top of this page.

This armoire is ideal for an entryway to a home, for storage in a kitchen or dining room, or even in an office. Unlike the typical armoire made in the 19th century, this one is smaller and better suited to today's diverse uses.