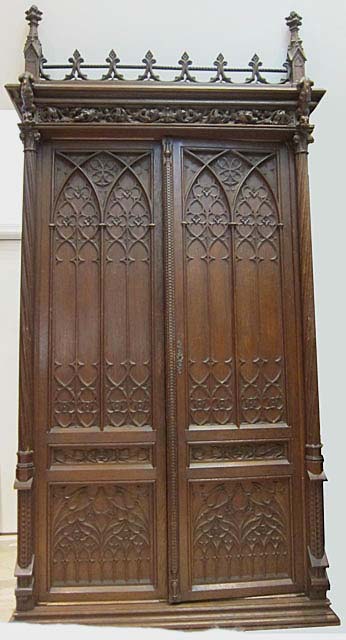 The armoire is a fascinating and versatile item of furniture, having evolved through stylistic epochs from a 14th century chest turned on its end and having a single door, to an 18th century double-doored storage area for priceless linens or clothing. By the early 21st century it had become the preferred habitat of television sets before their girth expanded far beyond an armoire's dimensions.

This example from the late 19th century may have been designed for a lawyer's office, as we purchased it along with other items that once comprised one. But it may have been an earlier commission, and the lawyer fell in love with it and wanted to admire it every day of his or her professional life.

In style, it is affirmatively Gothic, boasting such typical elements as fenestrage (tracery), finials in the shape of a flame, and a top railing in the design of half-moon patterns united by a slim, circular bar.

Most striking about this piece are the matching animals crouched as gargoyles, with mouths open and teeth bared, extending beyond the plane of the top corners and poised to attack anyone attempting to open the armoire. We have spent many hours trying to identify these creatures but, our search having yielded no definitive guidance, we offer our own explanation.

The short, pointed ears made us think immediately of a Doberman Pinscher, the breed of dog that would have been known in France as a Dobermann. After all, these dogs have traditionally acted as guardians, including Zeus and Apollo who had starring roles patrolling Robin Masters' Oahu estate in the long-running television series Magnum P.I.

We were charmed to learn that the breed's name came from that of a German tax inspector, Karl Dobermann, who developed it around 1890. Why the ribs are portrayed so prominently on these examples remains a puzzle. Who would want to depict an emaciated canine except possibly to suggest an even more lean and hungry look with which to menace intruders?

At one time, both of these gargoyles had tails that most likely extended above the top of the armoire. But they are lost to history -- or perhaps were docked in order to lend the creatures more authenticity as Dobermanns?

With the cabinet being French, we cannot resist imagining a connection with truffles. That dogs are used to find the precious fungus at the base of oak trees, and that the tree whose leaves are depicted on the frieze is an oak, combine to make the armoire an ideal truffle-safe. If stored in it, truffles would definitely need the dogs to guard them.

Uniting the crouching canines at the top of this armoire is a frieze of stylized oak leaves, remarkable for its depth and the open spaces behind the leaves. Symbolizing strength and endurance, the oak hangs onto its precious leaves each autumn, long after the other trees in our yard have shed their foliage. At the center of the frieze is an acorn, associated with authority or power as well as the seed from which the oak develops its strength.

Above the crouching dogs are traditional Gothic finials in the shape of a flame symbolizing the flamboyant Gothic style whose intricate tracery is found on the doors of the armoire. The base of the finials is square in shape with a lancet arch carved into the front and outer side. Above this base is a tapering pinnacle with bits of crocketing -- the crumpled acanthus leaves typically used to ornament Gothic spires.

Moving downward, the viewer's attention is drawn to the intricate fenestrage or tracery decorating the doors of the armoire. Broken into two main vertical sections, each door has an upper section comprising around three-quarters of the space, below which is a smaller panel. The overall design of the upper portion is a traditional one, using tall lancet arches topped by quatrefoils within a framework of a tall, pointed arch. The bottom panel is an elaborate series of radiating arches, again with lancets as the base. Separating them is a trompe-l'œil drawer panel ornamented with elliptical-shaped elements of tracery known as mouchettes.

Framing the front of the armoire are columns whose sections are divided vertically to mirror the main panels of the doors. The longest sections are decorated in a diagonal design reminiscent of Gothic cathedrals and crowned by capitals decorated in a variation of the Corinthian Order to emphasize the unity with the leaf designs used elsewhere on the piece. The lower part of each column employs the overlapping scale motif also found in Gothic architecture.

Finally, we note that the sides of the armoire support the notion that it was a special commission since they include costly and intricately carved linen-fold panels. Less expensive armoires would have had no carved panels on the side, or only rectangular panels repeating from top to bottom. Here, the height of the panels mirrors the break-down of the main panels on the doors of the armoire. In style, they resemble the graceful folds of those typically found at Beauvais and other locations in Picardy.

The armoire is in very good condition but, as noted above, with the tails missing from the Dobermanns. There is also a nick on one of the ears, as shown in the photo, below.

Due to lighting and flash photography color vary; true color is closest to that in the photo, below, of the top of the armoire.

The last picture at the bottom of this page shows the interior of the cabinet, filled with shelves and therefore making it ideal for storage in any room, from kitchen to dining room, library to office, but especially for storing truffles and other tasty food items in the kitchen.