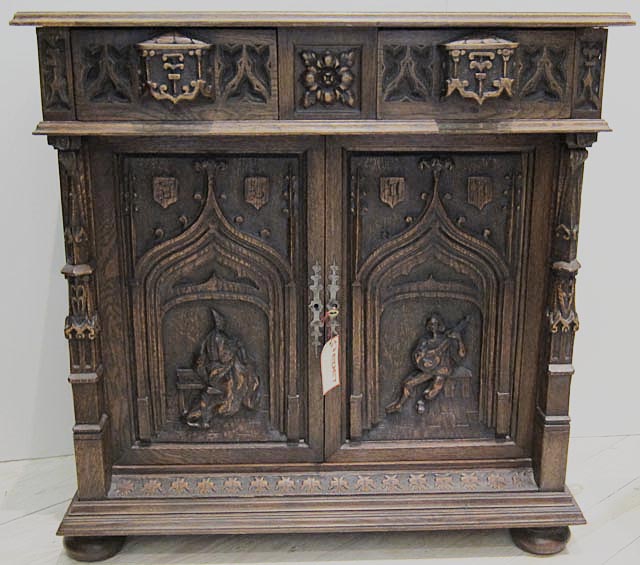 This cabinet evokes the medieval tradition of the troubadour — and the style of early 19th century French Gothic Revival furniture named for him — as nothing else we have offered. We love that the Troubadour Style sprang from musicians of the Middle Ages in the south of France or the Languedoc where the word for yes was oc and not the oui of more northern climes where the musicians were referred to as trouvères. The origin of the term troubadour is shrouded in mystery, not to mention academic quarrelling and so we won’t go there. Suffice it to say that the troubadours, and the songs they composed about love and chivalry, spread like wildfire around Europe, from castle to castle. The intimacy of the performances and the romance invoked by the subject matter led to vast numbers of compositions and the first attempts outside the sacred repertoire to preserve melodies and words with musical notation.

So ingrained in the French cultural memory were the troubadours that their name was given to a style of painting, architecture, and decorative arts harking back to the styles of the Middle Ages and seeking to create an ambience of that earlier time. An early 19th century precursor to the later Gothic Revival in France, the Troubadour Style was less concerned with orthodoxy of design elements and more focused on creating the human, even the romantic, aspects of the earlier time, much as Sir Walter Scott created with his novels.

This cabinet reflects the hallmark of the Troubadour style, emphasizing the human aspect over the ornamentation. Rather than panels of elaborate tracery, the two main figures – the musician and the lady – are the focus of the piece. Each is seated. The female figure on the left door panel wears the traditional hennin or cone-shaped hat of the Middle Ages below which long braids dangle. Her robes billow around her as she turns toward the musician on the right door panel. Her faithful hound is by her side. Both seem transfixed by the music of the troubadour, who is playing a long-necked Renaissance lute (or possibly a cittern). What is the troubadour singing? Are his poetry and music in praise of the lady? How should we imagine this tableau unfolds?

Capturing a moment in time, this engaging little scene pulls us viewers into spaces framed by a broad ogive arch, crowned as in the flamboyant Gothic tradition, by a stylized flame. Within these arches are smaller ones cascading downward to frame the figures themselves, as if in the great hall of a medieval castle. Perhaps the revelers have just enjoyed a sumptuous meal of game from the local lands and a sip or two of Malbec, the black wine of Cahors, so prized that it was served at the wedding of Eleanor of Aquitaine to Henry of Anjou (later King Henry II of England) at Poitiers in 1152.

In keeping with the early 19th century approach to Troubadour style, this cabinet places more focus on the figures and the story than on the architectural detail but still offers several intriguing aspects. For example, the frieze below the top, including the two drawers, has bits of tracery with a rosette in the middle. Very unusual are the two drawer handles left as outcroppings or oriels after the front of each drawer was carved away. With their ornate, sloping tops they remind us of Emperor Maximilian I’s rectangular outcropping with the gold-colored roof, dating from 1500, which remains the symbol of his rule as Habsburg Emperor and of the city of Innsbruck where his court was headquartered. Viewing tournaments from this perch, Maximilian continued the traditions of chivalry born in Languedoc and influencing Renaissance composers such as his personal tune smith from Flanders, Josquin des Prez.

Gothic style finials frame either side of the cabinet, tall and slim with a richness of architectural detail. The magnificent patina we see on the finials is reflected elsewhere on the cabinet, contrasting the dark crevices of detail and the lighter surface of the oak.

This cabinet would be useful in almost any room. Its compact size and roomy interior could hold a wealth of objects form glassware to linens to files, with room enough for a troubadour’s music manuscripts and a hennin or two.