New Wine in Old Venues and Tales from Vienna Woods

Living in the Woodlands, it’s easy to take our forest for granted, spoiled as we are with tall trees, 100+ miles of hike-and-bike trails, and ample opportunities for long walks where the woods begin a few feet from our doorsteps.

Similarly fortunate, but with a sylvan environment embracing wine, are the residents of Vienna. Former headquarters of the vast Austro-Hungarian Empire, Vienna is today the capital of the Republic of Austria. Political missteps that led to the shrinkage of Austrian territory in the aftermath of World War I may have ensured that Vienna avoided the urban sprawl experienced by other European capitals and the attendant elimination of green venues such as the vineyards still located within Vienna’s city limits.

As in centuries past, a dweller in the city’s center can reach the legendary Vienna Woods in less time than it takes to get from downtown Houston to the Woodlands. A 30 minute tram or bus ride transports a traveler from the city’s cosmopolitan First District to a rustic hinterland of forested Alpine foothills interspersed with vineyards, some dating back as far as the 3rd century BC when the Roman Empire lifted its ban on growing grapes north of the Alps and Austria’s 2000 year-old wine industry was born. 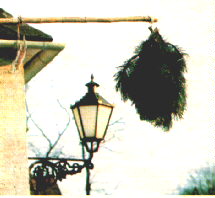 The bi-annual meeting of my law school’s alumni group in Vienna was an ideal opportunity to spend a late spring evening in one of the many hillside wine gardens where the former imperial capital intersects the Vienna Woods and vineyards. And what better place for a bunch of tax lawyers to relive their university exploits than in a Heuriger, that uniquely Viennese version of a wine garden, conceived in response to a tax break? To fill government coffers back in the 18th century, when beverages were heavily taxed and cheap beer was encroaching on Vienna’s wine industry, the reform-minded Emperor Joseph II permitted the vintners on Vienna’s outskirts to serve home-grown food with their “new” or “green” wine, to be drunk on-site without charging tax. A fir sprig hung each spring over the doorway signaled that the new wine had arrived. This uniquely Viennese institution was born with “Heuriger” denoting both the new wine and the tax havens where it was served.

Enshrined in a bureaucratic loophole, the Heuriger has grown into a destination with its own set of traditions and customs. For example, it is by nature a locale for communal conviviality due to seating on long wooden benches on either side of a narrow table. Arrive as a couple, you will leave with a new group of friends! Expected to be open from late spring through early fall, a Heuriger starts indoors but stretches up the hillside with tables and benches placed under towering oak trees just a few yards from where the new wine’s grapes were grown. The new wine, less alcoholic than its aged and bottled cousins, is exclusively white, served in pitchers, and accompanied by bottles of mineral water so revelers may prolong the eating and drinking experience without provoking a hang-over. No need to choose from a wine list or fret over vintages. The wine is the wine ̶ cool, light, refreshing, and irresistible in the Heuriger setting.

Heuriger food has evolved from a few rustic snacks to a wealth of tried and true offerings. Typically purchased inside at a buffet and carried up the hillside to be enjoyed family-style, the selections involve unique and memorable foods. While there is an emphasis on cold meats, slow-roasted pork, homemade sausages, horseradish, and vinegary versions of potato salads, my personal favorite is Litptauerkäse, a soft cheese for spreading generously on hunks of brown bread. The cheese, blended with chopped pickle, onion, and capers, turns a rich orange hue thanks to the addition of paprika. My husband, Michael, fell in love with a surprising staple of Heuriger cuisine – fried chicken. Served piping hot and fresh out of the grease, it has been dusted in flour seasoned with paprika and fried to perfection. Light, golden, crispy on the outside, moist and tender on the inside – watch out, KFC!

As with everything about Vienna, its Woods, and the vineyards carved from them, have a strong connection with music. Ludwig van Beethoven, though a native of Germany, spent his entire working life in Vienna, living much of it on the outskirts of the city bordering the Vienna Woods. For Beethoven and countless other creative types who called Vienna home, the nearby Vienna Woods symbolized and offered brief bursts of freedom, contributing directly to artistic output. Liberated from the cramped confines of the city, Beethoven’s imagination was unleashed on his strolls through the woods and hikes up to nearby peaks such as Klosterneuberg, whose monastery houses one of Europe’s oldest and largest wineries. 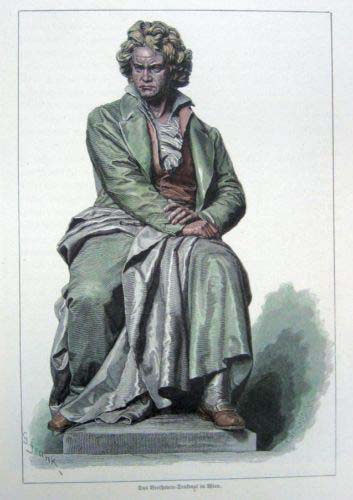 Living in Vienna during its occupation by Napoleon’s forces must have given Beethoven a taste of oppression and freedoms lost. He roused audiences with his passion for individual liberty while ushering in a new era of music and a commanding role for composers. The Prisoners’ Chorus from the second act of his opera, Fidelio, is a plea for liberty whose universal message of freedom from tyranny resonates with audiences to this day.

Later composers, including Franz Schubert, Hugo Wolf, Anton Bruckner, Gustav Mahler, and even Arnold Schönberg, wandered the Vienna Woods and found in them a freedom from urban life and fresh inspiration for glorious music. One can imagine that they visited a Heuriger or two, which are themselves music venues. The complete Heuriger experience involves performances by local musicians playing the traditional 19th century folk-like fare known as Schrammelmusik, after the famous quartet launched in a Heuriger by violinists Johann and Josef Schrammel, with the addition of friends who played guitar and clarinet. And the famous waltz, Tales from the Vienna Woods, by Johann Strauss the Younger? Apparently, it’s just an evocative title slapped on an earlier composition having no connection with Austria’s famous green belt.

The mixture of food, wine, music, and fellowship add up to what the Viennese are known for – Gemütlichkeit – a sort of friendly coziness and relaxation that connote freedom, for a few hours, from whatever else is going on in one’s life.

Next time, an English take on a French ‘chicken in every pot.’

The original version of this article appeared in the Fall, 2011 edition of the Quarterly Newsletter of the Wine Society of Texas, a non-profit organization dedicated to wine education and appreciation.