Venice Conjures its Wintertime Magic with Vivaldi and a Mandoline

Despite years of traveling to Italy, somehow I had always missed — or avoided — Venice. One time I got as close as Treviso, just a half-hour train ride away, but a punishing schedule of rehearsals and concerts at San Nicolò prohibited a quick detour to the city on the lagoon. Decades passed and my first trip to Italy with my husband, Michael, seemed the ideal time for us to discover La Serenissima together. We arrived late one December day after a flight from Houston to Milan, via Newark, and a train ride through Verona, Vicenza and Padua. 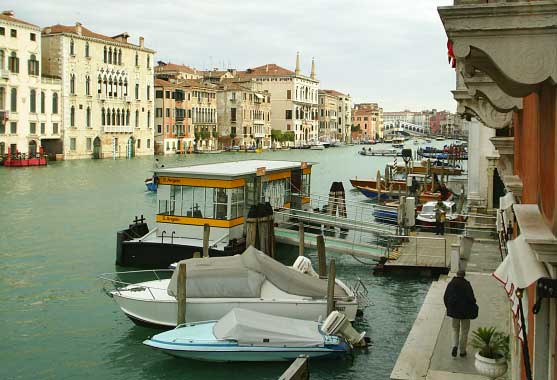 Our hotel, the Palazzo Sant'Angelo, was halfway between the Rialto Bridge and the Piazza San Marco, on the site where the Teatro Sant’Angelo, of Baroque operatic fame, had once stood. Exhausted from our long trip, we dropped our bags and headed off to explore the city and to stave off jet lag until a reasonable Italian bedtime approached. As we discovered quickly, maps were no help in the warren of streets and canals, tiny piazzas and squares. The secret to getting around was looking for direction signs on buildings, with arrows pointing either to the Rialto or San Marco. Few people were out and about after dark, most stores and restaurants were closed, and so we stopped in a bar for a glass of wine and some tiny sandwiches of Parma ham, mortadella (what we would call baloney but infinitely better) and miniature pastries. Sufficiently restored, we found our way back to the hotel with ease and settled in for a good night's rest. 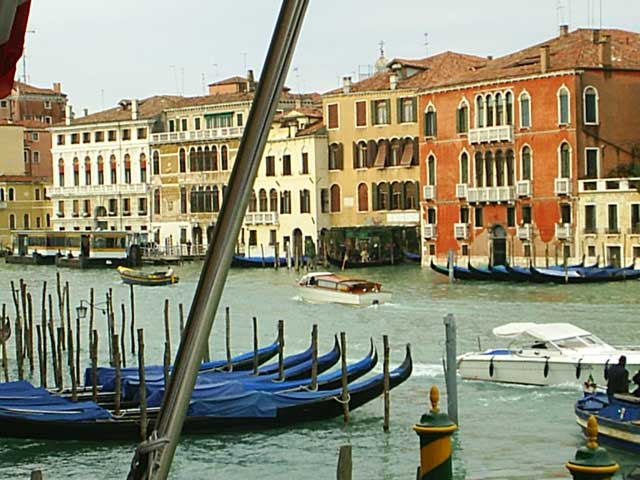 When we awoke the next morning, we were not prepared for the splendor awaiting us as we pulled back the steel shutters of our guest room windows. Checking in late, we had not realized that our room overlooked the Grand Canal with sweeping vistas across the water and upstream to the Rialto Bridge. Cold, damp, and snowy Milan had given way to Venice bathed in winter sunshine, the buildings glimmering in reflection on the water. With a breakfast of more mortadella, exquisite pastries, and strong coffee, we were fortified for a day of sightseeing and of sampling Venetian culinary offerings.

When it comes to favorite dishes, Michael is obsessed with duck in all its forms. A close second in the running is anything involving liver ̶ whether from duck, chicken, goose, or calf. And so our array of Venetian meals began with a quest to sample fegato alla veneziana or calves’ liver and onions Venetian style, but nothing resembling the shoe leather and charred onion bits that had sent me scurrying from my college dining hall to the local HoJo whenever liver was on the menu. Sampling this signature dish on its home turf was a delight ̶ the slices of liver pink on the inside but light and crusty, tender, succulent, and the onions fragrant, never greasy. Served with grilled polenta, all memories of vile predecessors were erased.

Our next meal involved stumbling upon an impromptu family reunion at Al Gazzetino, where we were treated to truffled risotto in all its seasonal splendor while the matriarch in the kitchen embraced us in la famiglia for a memorable repast. There was plenty of seafood, especially squid, steamed to perfection ̶ never fried – at Ristorante Anonimo Veneziano. Washed down with wine from vineyards in the Veneto region, everything came together exquisitely like a Crivelli painting or a Vivaldi concerto.

Justifiably, there is much more to Venice than food. For Michael and me it was a city of architectural bounty, anchored in the Gothic and skipping over the Renaissance to a final gasp of the Republic reflected in the triumphant Baroque style.

Over the centuries, Venice has nurtured, celebrated, and even banished some of the world's greatest painters and composers. One such 15th century genius by whom I am captivated, Carlo Crivelli, beckoned us. An up-and-comer, his career flamed out when imprisonment for adultery led to his expulsion from the city and exile to the Marche region where his enigmatic style flourished. To Venice's Accademia we had come to see his Saints Jerome and Cyprian, a panel from an altarpiece depicting the two saints with the lion sitting at the feet of St. Jerome, gazing up at him adoringly with a mane perfectly coiffed while offering his left paw, pierced by a thorn. Legend has it that the Saint removed the thorn and, in gratitude, the lion spent its life protecting Saint Jerome and guarding his donkey.

As with so many of Crivelli's paintings, a universal story is acted out by figures richly garbed and expressive, inviting the viewer to enter scenes of great drama and tenderness. And there I was, after years of yearning to come face to face with Crivelli's masterpiece, but the sole light bulb aimed at the painting was burned out and the entire panel was obscured in winter twilight. “How many Doges does it take to change a light bulb at the Accademia?” we pondered, as a troop of conservators happened by. Nabbing one who spoke English, we inquired whether the light might be fixed if we came back tomorrow. Unlikely during our stay, she offered. It had been burned out for months and required special equipment and engineers to replace it.

Venice was also a center for composers, from the Gabrielis and their antiphonal works composed for the Basilica of San Marco in Renaissance times, to the German opera composer, Richard Wagner, who died there in 1883. Deserving of admiration for far more than the Four Seasons, it was Vivaldi who best captured Venice in sound ̶ the rhythmic lapping of the water against the buildings and the bumping of the gondolas against their moorings, phrases arching like the graceful bridges across the canals, the shift between major and minor keys like the sunlight and shadow in the hidden piazzas throughout the city ̶ all are evoked in his restless music. It came rushing back to us like a Venetian high tide earlier this year in a masterful performance of Vivaldi's violin concerti, known as L'Estro Armonico, by Houston's own Mercury Baroque and now available on a CD whose cover captures the hues and harmony of this singular city in winter. 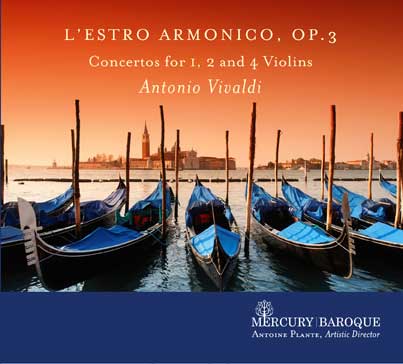 We found Venice thoroughly intoxicating and realized that we had allotted too little of our itinerary to these urban islands so willing to offer their enchantments to scant winter visitors. Early on our final morning in the city, the sirens sounded and horns announced the acqua alta or high water resulting from an unfortunate interplay of tides and rains common in wintertime. Having kicked ourselves for lugging our rubber boots in anticipation of floods that never materialized, we now found ourselves vindicated and fashionably attired to step out of our hotel into water over a foot high where earlier a sidewalk had been visible. Here was another aspect of a magical visit to a mystical place, with lots of reasons to come back again in winter.

Back in Houston a few weeks later, Michael planned a New Year's Eve celebration with longtime Wine Society members, Nancy and Bill Pape, to give them a taste of some of the foods and wines we had savored in Venice, accompanied by our favorite Vivaldi recordings. While slicing the onions for fegato alla veneziana with his trusty mandoline (not the sort Vivaldi would have played), he whacked off part of his fingertip, requiring a trip to the Emergency Room and a number of stitches. It was not until the next day that Nancy and Bill learned why we had not been home when they arrived. Not to miss an opportunity for liver and onions, however, Michael was sufficiently recovered to host what became a New Year's Day celebration of restoration and renewal, Venetian style.

Next time, musseling in on trips to Belgium

The original version of this article appeared in the Winter, 2010 edition of the Quarterly Newsletter of the Wine Society of Texas, a non-profit organization dedicated to wine education and appreciation.