Czeching Out Oranges and Austrian Wines in Prague

The 2006 film, The Illusionist, revolves around a magic trick using an orange tree and around a locket, an orange tree-shaped inlay in whose cover becomes a clue in a murder mystery — all in turn of the century Vienna. But the real illusion is that Prague stood in for Vienna, as it did in Milos Forman’s 1984 film Amadeus, based loosely on the life of composer Wolfgang Amadeus Mozart. During my recent business trip to Prague, oranges and Mozart were foremost in my mind but an introduction to several remarkable Austrian wines proved a highlight as well.

For classical musicians and especially a Mozart-lover like me, Prague is ground zero for some of the Austrian composer’s greatest triumphs. The inhabitants of the city feted him as nowhere else. It was filled with talented performers for his demanding works but also proved to be his refuge away from the vicious intrigues of the Hapsburg Court in Vienna, such as those dramatized in Amadeus but filmed on location in Prague. Of the theaters where Mozart’s 22 operas were first staged, only the Estates Theater, a few steps from Prague’s Old Town Square, is still in existence and performing operas. Sadly, none was on offer while I was there.

In 1787, Mozart’s Don Giovanni was premiered in the Estates Theater. Based on Tirso de Molina’s Spanish play about Don Juan, the librettist was Lorenzo da Ponte, pal of the non-fictional lothario, Casanova. Don Giovanni offers some of Mozart’s most enigmatic music and precise psychological characterizations in an age before Sigmund Freud made Vienna the center of psychoanalysis.

On the last day of our visit to Prague several years ago, my husband, Michael, and I made a pilgrimage to the Estates Theater as I recalled the times I had performed the opera elsewhere in Europe, during the Cold War, when Czechoslovakia was off limits to Americans. Neither of us had dreamed we would ever visit Prague or this magnificent jewel of a theater linked to one of our favorite operas. Snippets of Donna Anna’s arias resounding in our heads, Michael and I decided to reflect on it all by enjoying afternoon tea. Caddy-corner from the front of the theater was one of four locations of Café au Gourmand, the perfect spot for a tea break. Making my pastry selection from the glass case, I noticed that there was just one slice left of what the sign described as tarte à l’orange or koláč z pomerančů in Czech. So, I figured it must be good if it was scarce. It was definitely not a kolache in the Texas sense! 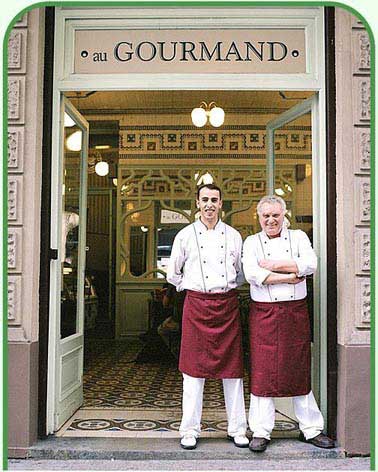 We don’t recall what Michael ordered because the tarte à l’orange was so remarkable that we ended up sharing it and savoring every morsel. The base was a pâte sucrée or pastry dough with a hint of sweetness. On top of it were circular slices of orange that tasted fresh and succulent. Interspersed with this were the crunchiness of a croquant and a hint of Grand Marnier. Topping it off was a layer of icing laced with orange zest. A magnificently orchestrated ensemble of sweet crust and icing, pleasingly sour fruit, and the bitterness of the orange zest, resulted in the pastry equivalent of the magnificent finale of Act I of Don Giovanni. We were captivated and longed for another piece of tarte à l’orange, but the café was sold out and we would be leaving town before it opened the next morning.

So when I was invited to return to Prague and speak at a conference, I became obsessed with tarte à l’orange and sent an email through Café au Gourmand’s website to make sure they still offered it. I ended up placing an order for an entire tarte, figuring I would either find a way to bring it back to Houston or devour it in the process!

When I arrived in Prague, the weather was hot and sunny. After checking in at the Hotel Intercontinental, a hideous, Communist-era monolith along the Vltava (Moldau) River, I made a beeline for Café au Gourmand. Sitting at one of the outdoor tables while staving off jet lag with a large coffee, I ordered a salad and a piece of tarte à l’orange. The tarte was even better than I remembered and provided the energy for a long walk along the river with the strains of the Moldau section of Bedřich Smetana’s epic tone poem, Má Vlast, swirling through my head.

The conference featured several memorable meals and, to my surprise, nothing but Austrian wines. While the Czech Republic has a wine industry dating back to Roman times, most of the vineyards are in Moravia, south of Brno toward the Austrian border. Wine seems to command scant attention in a country that leads the world in per capita consumption of beer at 160 liters for the average person each year.

For sheer beauty of place, nothing could match our buffet dinner at Hergetova Cihelna, a restaurant boasting a beautiful stone terrace next to the river. With an exquisite view of the Charles Bridge as twilight descended on the city, we feasted on duck confit, spinach spätzle with cheese sauce, tiny cakes of leek and potato, and a dessert concoction called a Mocca or caramel cake topped with chocolate-infused whipped cream. Dinner was accompanied by a selection of Austrian red and white wines.

The next and final evening of the conference involved a gala dinner at Francouzska Restaurace, a 100 year-old French restaurant on the ground floor of Municipal House, a magnificent art nouveau building abutting one of the medieval gate towers of the Old Town. Themes included oranges, in the form of a dressing for a smoked duck salad, and asparagus in the form of a green asparagus soup as well as green and white asparagus complementing a main course of roasted veal tenderloin with potato purée and truffle sauce. Accompanying the meal were two Austrian wines from the Jordan winery in Pulkau: a Grüner Veltliner, Ried Talbach 2010 and a Zweigelt Rubin, Barique 2008. The Zweigelt was especially wonderful – full-bodied and a deep reddish-purple color – the perfect complement to the veal tenderloin and asparagus.

After the conference ended on Saturday afternoon, I headed for Prague Castle, the hilltop fortress of churches and palaces, including an orangery — an early form of greenhouse found on noble estates throughout northern Europe to shelter citrus in the wintertime and make oranges available year-round. In the case of Prague Castle, the Orangery dated back to the 15th century and was reconstructed in a high-tech version just a few years ago – perhaps an inspiration for Café au Gourmand’s tarte à l’orange?

The Lobkowicz Palace is our favorite place within the Castle complex. The Palace is now a privately-owned museum after being returned to the descendants of the Lobkowicz family who fled to the U.S. after their properties were confiscated in 1939 (and returned in 1945 only to be confiscated again in 1948). For centuries it was an important location for music-making in Prague, now commemorated each afternoon by a concert whose music echoes throughout the building while providing the perfect accompaniment for museum-goers. The Lobkowicz family were important patrons of composers in Prague and in Vienna, where they also had a palace. Ludwig van Beethoven’s contemporary and benefactor was Prince Joseph František Maximilian, 7th Prince Lobkowicz, whom Beethoven nicknamed Fitzliputzli.

The Palace houses an important collection of musical instruments and manuscripts in addition to paintings such as a Bruegel masterpiece, The Haymaking. Open to the public since 2007, the Palace has a wonderful café whose menu offers a nod to the American connections of the Lobkowicz family in the form of one of the best cheeseburgers and fries I have ever tasted. The breathtaking view of the city from the café terrace is well worth the price of a snack or a meal.

The next day, I returned to Houston with the precious tarte à l’orange in my checked baggage. No illusion, Michael and I shared the bounty and remembered our first magical visit to Prague and Café au Gourmand.

Can’t get to Prague anytime soon? The next best thing may be Houston’s own Czech Center Museum, a “baroque palace” in the Museum District, built entirely with private donations.

Next time, new wine in old venues and tales from the Vienna Woods

The original version of this article appeared in the Spring, 2011 edition of the Quarterly Newsletter of the Wine Society of Texas, a non-profit organization dedicated to wine education and appreciation.