Paris at a Snail's Pace

Our recent wintertime visit to Paris got off to an inauspicious start when the sniffles I arrived with progressed into a nasty respiratory infection. As a result, we had to lighten our hectic schedule of meetings with antique dealers and museum curators in between pilgrimages to Les Puces de Saint-Ouen, the world’s largest antiques market. Our relaxed pace proved enjoyable, leading to the discovery of a wonderful old eatery in the heart of the Right Bank and affording us time to drink an entire bottle of wine at lunch.

Instead of our usual and preferred means of transport – zipping around on the Métro below streets clogged by perpetual traffic jams – we strolled the avenues and boulevards like flâneurs from the Belle Epoque and reveled in the sights and sounds. Again and again we passed shops we’d never seen before and whose main products were bagels and cupcakes. Why, we asked ourselves, when Paris already offers some of the most delectable objects ever to emerge from an oven, would anyone buy these distinctly American items that even McCafé does not sell? We despaired that the interlopers might displace baguettes and croissants but found hope in recalling the chocolate chip cookie invasion of a quarter century ago, which faded away as swiftly as last season’s couture.

Our annual trips to Paris mean a chance to savor beloved dishes from our list of favorite haunts, which grows lengthier and more daunting with each visit. My husband, Michael, is passionate about French cuisine of all sorts, from superb duck breast sampled at the temples of gastronomy in Paris and Lyon to whole chickens served up in rural market towns from glass-sided box trucks fitted with rotisserie ovens emitting the irresistible fragrance of roasting poultry. While Michael is a formidable cook, adventuresome eater, and relentless when it comes to chasing down beloved dishes, I am happily along for the ride. And so it was that we uncovered a new favorite spot. And, as often happens, the discovery was accidental.

Miryam, on duty at our hotel’s front desk, is accustomed to fielding all sorts of tourist entreaties. She overheard Michael’s laments upon learning that parmentier de canard was no longer available at Les Caprices de Charlotte, our beloved breakfast-through-dinner-and-great-pastry-anytime eatery on the corner. Named for Antoine-Augustin Parmentier, who championed cooking with potatoes back when they were exotic tubers new to European cooks, parmentier de canard is a stick-to-your-ribs wintertime casserole of duck and puréed potatoes. Miryam’s internet sleuthing yielded a bistro, just off the Place de la Concorde, whose website proclaimed parmentier de canard among its specialties. We decided to amble over and check it out.

As often happens in France, websites tout information as a digital billboard but are rarely updated. On arriving, we learned that the bistro didn’t offer parmentier de canard anymore and so Michael rattled off a catalogue of other traditional favorites in the hope that one of them might be available.

Eric, the enthusiastic manager, latched onto one item on the list – ris de veau (veal sweetbreads) – in the hope of salvaging things. No, the bistro didn’t offer this dish but a sister eatery where he was also a manager, L’Escargot Montorgueil (the snail on Montorgueil Street), was open seven days a week and prepared it every day.

We kept this in mind as we headed out the next morning for some serious shopping, but not of the fashion variety. Our destination was the BHV with a plan for lunch afterward at L’Escargot Montorgueil, a ten-minute walk away.

The BHV or Bazar de l’Hôtel de Ville is a French department store located by City Hall and whose basement houses a home improvement and sundries store like no other, spanning a city block. They even stock all the supplies needed for home wine-making – except the grapes. We spent hours enjoying the impressive array of products and chatting with the knowledgeable staff about electrical issues Michael was hoping to resolve for renovating antique chandeliers. While he didn’t find the light bulb adapter he was seeking, I snared a pair of violet leather shoelaces I’d been stalking for years. Such is the typical BHV story and why this one-of-a-kind emporium should be on every tourist itinerary. Emerging from the basement into brilliant winter sunshine, like snails peering out of our shells, we were ready for lunch. 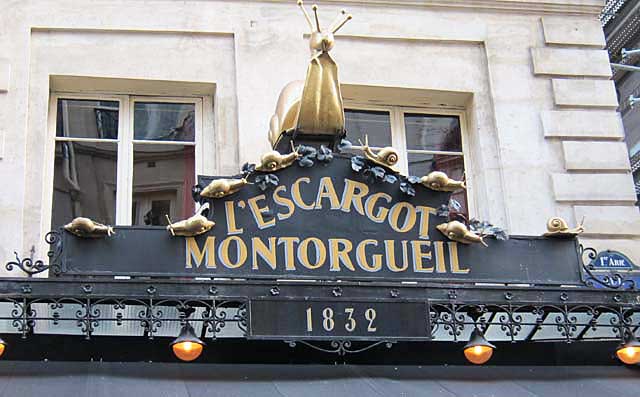 Located just steps from the Châtelet-Les-Halles transport and shopping hub that was previously the location of the city’s central food market and slaughter houses since medieval times, L’Escargot Montorgueil dates back to 1832 when Paris’ most popular restaurants surrounded the market area and offered items such as ris de veau routinely. Dedication to serving offal and utilizing all of a slaughtered animal was at the heart of these eateries, pre-dating the “whole hog” or “nose-to-tail” movements of the last decade.

On this first visit, we were seated on the second floor by the top of a narrow spiral staircase at a little table from where we could observe the restaurant’s devotion to snails. This included the giant gold ones outside the front window, the tinier gold ones in the pattern of the carpet, and the designs etched onto the water glasses. Best of all were the plates of escargots, borne skillfully up the stairs by the staff and destined for eager diners, trailing an intense aroma of garlic butter which engulfed us as we perused the menu.

I’m not a snail eater and am squeamish about the whole process of purging, killing, removal from the shell and eventually inserting snail meat back into a shell for cooking. But Michael adores them. He started with a plate of six, prepared the traditional way with garlic butter and a bit of white wine and parsley, based on a recipe dating back to the founding of L’Escargot Montorgueil. Wielding like a pro the contraption for holding the snail shell and the short slender fork for extracting the meat, he deftly captured every morsel and pronounced the snails superb.

But how to explain this French obsession with snails? Other snail sightings on our walks through the city included escargots displayed in bakery windows. Spiral-shaped and made from dough with raisins, they resemble American cinnamon buns.

Even the Louvre contributed, exhibiting a 17th century still life by Abraham Mignon where the tiny gastropod is portrayed among lavish banquet-makings amassed in a grotto.

Considered meek, lazy, and a garden pest in our times, snails enjoyed a more ferocious reputation in the Middle Ages when, along the borders of numerous French manuscripts, they were depicted larger than life and in bellicose poses. Was the snail a generic stand-in for deadly warriors, menacing and anonymous while hidden behind their helmet’s visor, which a valiant knight might be forced to vanquish? Traveling around with its shell like a protective suit of armor, the snail could emerge at any time, ready for battle, just like a knight of unknown allegiance…maybe friend, maybe foe. Whatever the explanation, these snails are intriguing and signal their importance in French culture beyond the kitchen.

Continuing with our meal, Michael feasted on ris de veau as his main course. It was cooked to perfection with the creamy texture and delicate crustiness only an accomplished master of the sautoir pan can produce. 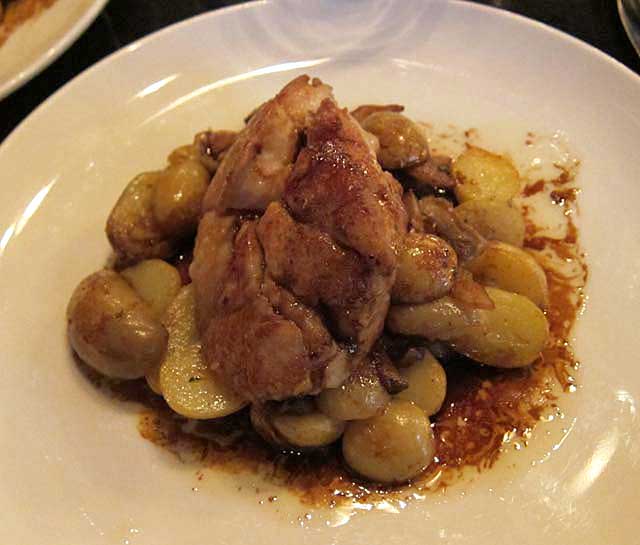 Served on a bed of petite flavorful potatoes and mushrooms (pleurotes) along with a drizzle of veal reduction sauce, the dish was a masterpiece. Having passed on the snails and delegated to Michael the role of guinea pig for ris de veau, I opted for a pork chop – farm-raised, pan-fried, and deeply flavorful. It was served with puréed potatoes and a sauce of intense and fragrant pan drippings. Verbal descriptions cannot begin to do justice to these dishes or evoke the utter pleasure they provided.

To accompany our meal we drank a red Sancerre wine, Les Châtaigniers 2012, from the Loire Valley. Its light and fruity nature made it the perfect accompaniment to our main courses.

Hooked on L’Escargot Montorgueil, we immediately reserved our next meal. We would have lunch on New Year’s Day as the ideal way to usher in 2015. On this second visit, Eric greeted us warmly and seated us in the dining room on the ground floor where the décor, including beautifully painted ceilings, velvet banquettes, elaborate brass lighting fixtures, and huge mirrors, evokes a Belle Epoque pedigree. One half expected Musetta to waltz in on the arm of a moneyed beau and break into song.

We both ordered ris de veau but Michael preceded it with pan-seared foie gras accompanied by fig jam. The slices of duck liver were perfectly cooked, slightly pink, and entirely scrumptious. After our main course we finished off our bottle of Sancerre with some artisanal Cantal cheese and hunks of L’Escargot’s signature baguette encrusted with poppy seeds – a reminder never to skip the cheese course at a fine French eatery. Capping our meal was L’Escargot’s exquisite take on the traditional dessert we had heard about all our lives but never tried – crêpes suzette. Delicate pancakes with an intensely orange-flavored sauce, they were prepared by Eric tableside with a flaming flourish.

If this all sounds touristy, it wasn’t. While some patrons were foreigners keen on their first experience with snails, most were discernably French and delighted to partake of traditional cuisine expertly cooked, reasonably priced, and served in surroundings celebrating its origins. 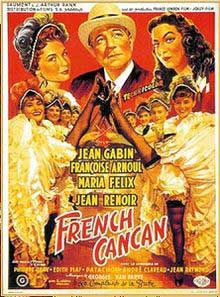 My being a bit under the weather meant spending most nights “at home” in our hotel room where we watched TV while consuming slices of cherry crumb cake or chocolate pistachio tarte procured from Les Caprices de Charlotte. One evening’s broadcast marked the 60th anniversary of the classic film called “French Cancan” directed by Jean Renoir, son of the impressionist painter. The English word “French” in its title reflects the cancan’s origins as a marketing ploy to attract well-heeled English-speaking patrons to the newly opened Moulin Rouge night club. All that dancing, discovery of an ingénue, and the-show-must-go-on intrigues, put us in the mood for more Belle Epoque fare.

The next morning, our final full-day in Paris, we lingered over breakfast while weighing the possibilities for lunch. We could go back to some of our favorite places in the neighborhood but L’Escargot Montorgueil still beckoned. Why not wander in the direction of the Marais, past the Opéra Garnier, the Stock Exchange, and the Palais Royal, and see where we end up? Along the way we peered at many a restaurant menu, just in case something else might tempt us, but in the end nothing could diminish the siren song of L’Escargot Montorgueil. This time, we preceded our ris de veau with a velouté de parmentier or light and creamy soup of leeks and potatoes – a marriage made in heaven. Regrettably, we had to bid Eric and his colleagues farewell, vowing to return with renewed dedication to enjoying Paris at a snail’s pace.

Next time, an excursion to a royal hunting lodge where we bag an unexpected feast.

The original version of this article appeared in the Spring, 2015 edition of the Quarterly Newsletter of the Wine Society of Texas, a non-profit organization dedicated to wine education and appreciation.