Quaffing the King's Tipple in a Paris Comfort Zone

After a long, damp, chilly winter’s day of trudging around Saint-Ouen, France's wholesale antiques market on the outskirts of Paris, my husband, Michael, and I were tired and hungry. Too pooped to dress up and stay up late for the obligatory couple of hours at a restaurant on a Saturday night, we hoped to find somewhere more casual and quick within a tight radius of our hotel off the Place de la Madeleine. This neighborhood, filled with corporate headquarters, law offices, embassies, designer boutiques, and grand department stores, offers a restaurant every few meters. Most seem geared to the expense account lunches of captains of industry and their investment banker cohorts. Some were even open on a Saturday, deserted but perhaps hopeful a tourist or two might wander in.

In the hierarchy of French eateries, the restaurant is top dog, including some of France's most famous temples of gastronomy in and near the Place de la Madeleine (Hediard, Fauchon, Le Grand Véfour, Les Ambassadeurs, to name a few). Lower in the pecking order are: the bistro — serving hearty offerings in an atmosphere more casual and cozy; the brasserie — originally developed around Alsatian food and beer; the café — with its simple fare such as the croque monsieur and the omelette.

At each level, certain expectations are harbored on the part of proprietor and customer. For example, it is not considered appropriate to order only one course at a restaurant or to forego a bottle of wine. While portions are typically not so large that left-overs are an issue, asking for a doggie bag is definitely a faux pas. 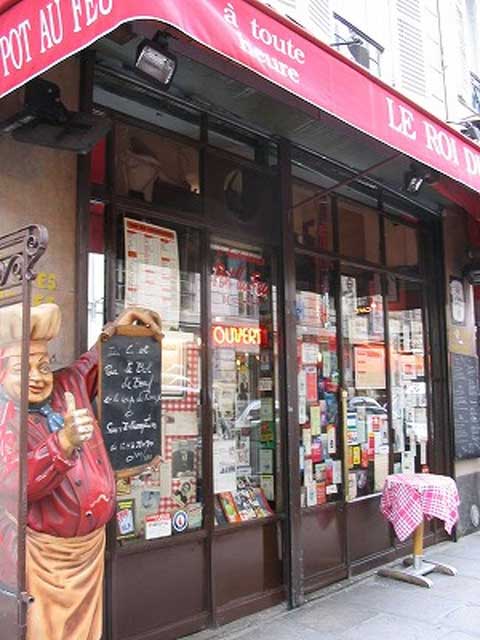 After a half hour of reconnoitering, when we were about to give up and head for the Galeries Lafayette grocery store to procure the fixings for a "picnic" in our hotel room, we happened upon an eatery whose steamy windows were filled with newspaper reviews and testimonials from France's entertainment elite. The sounds of French people talking and laughing spilled into the street from the only place in the neighborhood that seemed to have any patrons. "Le Roi du Pot-au-Feu," the awning proclaimed (“the King of Pot-au-Feu”). A life-size statue of a chef stood outside the door holding a blackboard menu with the words "pot-au-feu" and a price. This looked like just the thing – casual, nourishing, not requiring any tough decisions or compromises.

Pot-au-feu, literally, "pot on the fire," is one of France's favorite wintertime dishes and beloved comfort foods ̶ right up there with such regional specialties as cassoulet and coq-au-vin. Its origins are obscure but it made its way into the annals of the French Revolution when Count Mirabeau declared pot-au-feu to be "the foundation of empires." The Count died before Napoleon crowned himself emperor (or his namesake, Mirabeau Buonaparte Lamar became the second President of Texas). This stick-to-your ribs amalgam of less than tender cuts of beef, roasted marrow bone, potatoes, turnips, leeks, carrots, cabbage, and onions could have fueled Napoleon's army on its conquest of Europe, provided troops stayed in one place long enough for the requisite hours of simmering (never boiling) to achieve the optimal blending of flavors.

We ventured inside but no maitre d' or podium with a book of reservations awaited us. A lone waiter gestured toward a tiny booth, the perfect size for two famished souls. Rustic, no-nonsense décor signaled this was a destination for serious devotees of pot-au-feu. As we settled in and unbundled our winter gear the waiter appeared at our table empty-handed – no menu, no notepad. He looked at Michael. "Pot-au-feu?" he asked, eyebrows raised and nodding his head encouragingly. "Oui." Next, he turned to me. "Pot-au-feu?" "Absolument," I responded. What else? Looking around, it seemed everyone had made the same choice. A few minutes later, he returned with two plates piled high, along with a condiment tray of horseradish, pickles, and various types of mustards. "Du vin?" he asked. We nodded and he produced a bottle of wine with no label, only a few letters scrawled in white to say it was Le Roi du Pot-au-Feu's own red wine. 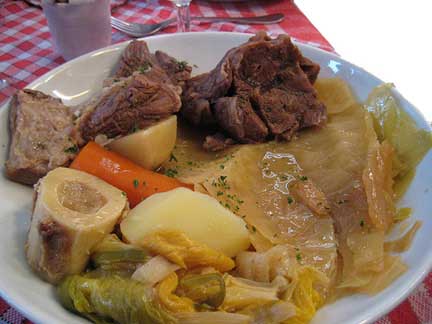 We dug in, savoring the aroma and warmth of this traditional stew and washing it down with the wine ̶ fruity and just hearty enough to stand up to the horseradish or mustard daubed onto forkfuls of beef. The meat was tender and flavorful, the leeks and onions slightly piquant, the potatoes acting like little sponges soaking up and magnifying the flavor of the beef juices. Sensing from our American-accented French that we might not know all the ins and outs of pot-au-feu consumption, our waiter checked up on us and demonstrated the pièce de la resistance — bone marrow slathered on a garlicky baguette and sprinkled with sea salt.

So much for all those nearby restaurants offering complex architectural creations, incorporating exotic ingredients and innovative pairings designed to delight the eyes and the palate. Instead, we had just filled ourselves to bursting with France's ultimate comfort food, served unpretentiously and unceremoniously to an adoring throng of mostly French urbanites longing for a taste of what their mothers had fed them and from a kitchen their rural forebears would have cherished. While we love the haute cuisine that the French create without peer, it is also possible to eat simply and exceedingly well at a popular price without having to leave the heart of the City of Light. By taking a step out of our restaurant comfort zone we had plunged headlong into a bistro celebrating the ultimate French comfort food…and loved it!

Next time, a Hungarian Rhapsody of Duck and Tokay in Budapest.

The original version of this article appeared in the Spring, 2010 edition of the Quarterly Newsletter of the Wine Society of Texas, a non-profit organization dedicated to wine education and appreciation.