Cracking the Morse Code on a Visit to Oxford

I first glimpsed the magnificent gothic spires of Oxford on my initial trip to Europe, as a college sophomore, on the Vassar Madrigal Singers’ tour. The highlight of our journey was singing in Oxford’s Holywell Music Room, a concert hall where the titans of the 18th century music world, Handel and Haydn, had also performed.

However, there had been little time between rehearsals and performances to explore the city. I had always wanted to go back and so was delighted when my husband, Michael, proposed that we spend a few days there in conjunction with a business trip to London. His desire was not born of academic curiosity or classical music but rather sprang from the Inspector Morse TV series that began in 1987 and ran through 2003, followed by sequels called Inspector Lewis and a prequel called Endeavour (after Morse’s improbable first name). Making lavish use of the city and its colleges, the series have excelled at transforming fans into tourists while sparking a cottage industry of Morse-related offerings.*

The Inspector Morse novels, from which the TV series derived, were the brainchild of Classics scholar, crossword maven, and Cambridge graduate, Colin Dexter. His fictional policeman was an Oxford graduate, curmudgeonly bachelor, aficionado of grand opera, and veteran tippler who never touched wine. The murders Morse investigated involved complex lives and plots. Homicides sprang from jealousy (whether romantic or academic), philandering, revenge, drug-dealing, or to put an end to blackmail. Weapons of choice included poisons, scarves, classic cars, and occasionally a firearm, but only if connected with a genteel bit of hunting. Perpetrators included Oxford dons, aristocrats, choristers, undergraduates, and opera-goers. Thankfully, the real murder rate in the city falls far below the fictional body count.

Numerous Oxford colleges, with their gothic and neo-gothic architecture surrounding quadrangles of meticulously mowed and manicured grass, formed the backdrop for many a murder or encounter with a suspect. Exterior shots of Inspector Morse and his protégé, Inspector Lewis, en route to yet another murder scene, also took them by the Radcliffe Camera, the Sheldonian Theatre, and under the Bridge of Sighs. One murder even took place during a performance at Holywell Music Room.

Operating under various pseudonyms, and supplying a guest room for the murder of a fictional American tourist, was the Randolph Hotel, the base of operations for our stay in Oxford. Its petite and cozy bar was the site of many a conversation between Morse and Lewis as they puzzled over clues. Now named the Morse Bar, it is a magnet for fans of the show hoping to encounter Colin Dexter on one of his regular visits.

Our sojourn in Oxford began by bus from Heathrow Airport after an overnight flight from Houston. No matter how often we traverse the English countryside, we are charmed by the tidy villages, the neatly groomed pastures, and the lambs gamboling about in the late spring sunshine. That these locales have been inhabited since the dawn of history leaves us half expecting to see a knight or two galloping past. 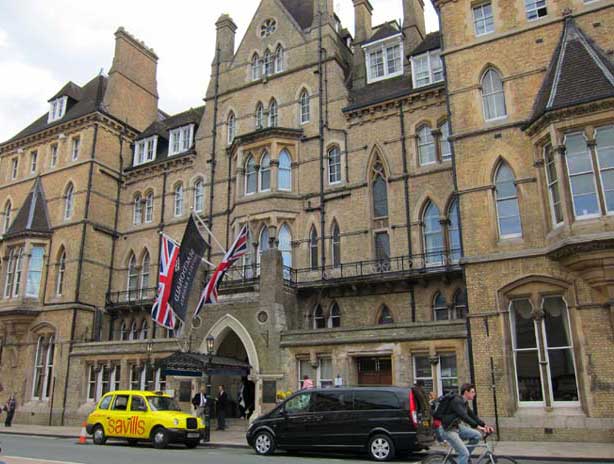 After checking in at the Randolph, we headed out to explore. But not before confronting the biggest who-done-it of our journey – how the bellman got back to the entrance through the maze of narrow corridors connecting the various structures fused onto and now comprising the hotel. Instead, we learned to just follow our noses to the sumptuous English breakfast that awaited us each morning in the elegant dining room. We chuckled as we recalled the banker’s wry observation from another long-running British series, Chef, set at a restaurant on the outskirts of Oxford. “If you want a good meal in England, eat breakfast three times a day!” 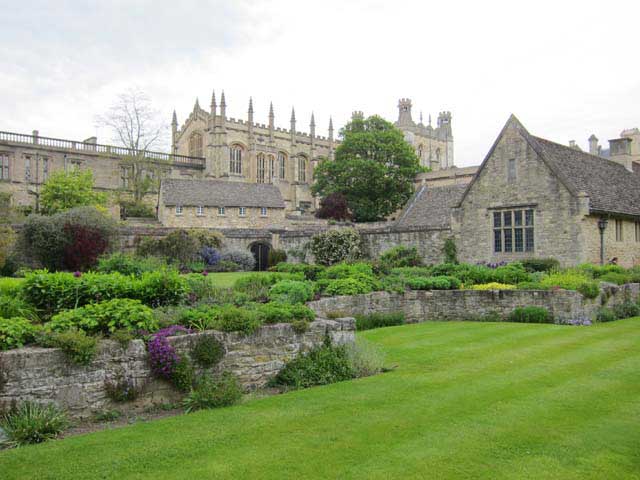 We dared not spend all our time obsessing over breakfast when this city of architectural gems beckoned and the gray clouds were lifting to reveal a somewhat sunny afternoon. We set out through the pedestrian zone to Christ Church College; the University’s largest, and home to a gothic cathedral that is the world’s smallest. For a time, Christ Church was called King Henry VIII’s College. Gazing out from a full-length portrait, he still surveys the great dining hall that inspired the one at Hogwarts in the Harry Potter films. The college and its colorful gardens were featured often on the Morse series as well. 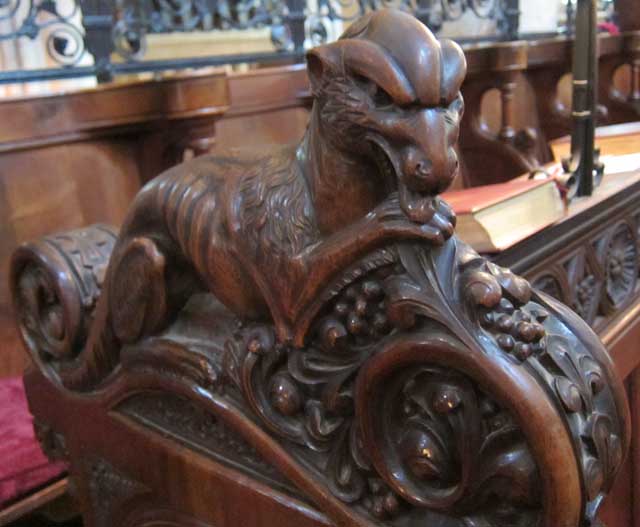 Being lovers of gothic architecture and always on the prowl for interesting stylistic elements, the buildings comprising the college, as well as their interiors, are a feast for the eyes. The wooden carvings inside the cathedral, of elaborate fleurs-de-lis and fantastic animals, are among our favorites. While lingering there, we found ourselves overwhelmed by emotion as we contemplated that, but for this church, we probably would never have met. It was here that John Wesley worshiped during his student days and was ordained as a minister. Eventually he rebelled against Anglican teachings to found the Methodist Movement whose first church was in Oxford. He later visited America and established Methodist churches which came to include, a century or two later, the one in Sherman Oaks, California where Michael and I met almost three decades ago.

By the time we left Christ Church College it was getting late and time for us to pick up a light “dinner” at the Marks & Spencer’s Simply Food on our way back to the hotel. The shops, found in many European cities, never fail to remind us of our years living in Paris when the signature M&S sandwiches and Indian-inspired foods provided a welcome break from the glories of French cuisine. We were relieved that our favorites were on offer in Oxford, including free range egg & watercress sandwich, chicken tikka sandwich, cheddar cheese ploughman’s sandwich, fresh mango spears, and sweet Thai chili coriander crisps (potato chips).

The next day, after a grand English breakfast at the Randolph, including eggs, rashers (bacon), ham, sausage, blood pudding, toast, and coffee, we crossed the street to visit the Ashmolean Museum. The first museum associated with a university and founded in 1677 with the collection bestowed by Elias Ashmole, the Ashmolean is still free of charge for its visitors. We explored the rooms filled with Old Master paintings, Renaissance Italian ceramics, and an intriguing collection of finger rings, all the while recalling Morse episodes in which the clue to solving a murder was found among the Ashmolean’s collections.

Renovations since Morse’s time include a rooftop restaurant with lovely views of the city. It ended up providing the most memorable meal of our trip. Michael had half of a roasted poussin (young chicken) while I had the spring frittata and Stilton cheese plate. We had no problem polishing off a bottle of Cuvée Alice, a light and fruity red wine from Château Ollieux Romanis in Corbières (Languedoc). The desserts were stunners. Michael had chocolate mousse with salted caramel (threatening to order a second) and I had poached pear on pain perdu. Suitably fortified, we finished up with a stroll through the archaeology collections.

We awoke on our final day in Oxford to what had made a bigger impression on me than breakfast during my first visit – the sound of church bells ringing all over the city on Sunday morning. There didn’t seem to be as many this time, nor did they go on for as long, but their sound was a reminder of the music that first brought me to this city so many decades ago.

Music was the theme for our final meal before heading back to London. We arranged to meet up with Emily van Evera, who lives outside Oxford. Emily is originally from Minnesota but came to England to pursue a career in Early Music and has long been soprano-of-choice for performances of the Baroque and before. We had not seen each other since college and so there was a lot of catching up to do at the Old Parsonage over roast beef and Yorkshire pudding, the traditional Sunday carvery meal. The most delicious elements were fresh asparagus with hollandaise sauce and a molten chocolate dessert, all accompanied by a pleasing Malbec.

We hated to bid farewell to Oxford but we take comfort in visiting, virtually, with each new episode of Endeavour, the series that began airing several years after our visit. The second episode, called Fugue, offered one of the most exquisitely atmospheric scenes ever shot for the apprehension of a murderer, while the characters channeled the second act of Tosca. Filmed on the roof of Trinity College, the setting sun seems to ignite the gilded torches atop ornamental urns at the “magic hour” so prized by cinematographers, lighting the way to heaven for the hapless victims of a serial killer. 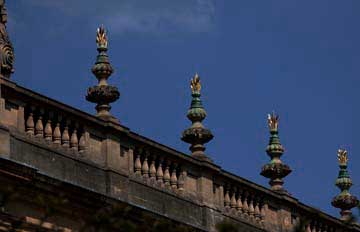 Emily van Evera herself became embedded within the Morse canon not long after our visit. Her sublime rendition from 1994 of Dido's lament from a recording of Henry Purcell's Dido & Aeneas was included in Rocket, the episode after Fugue in the Endeavour series. One can sample this and other music featured in the series on the Endeavour recording and Emily's performance in the complete recording of the opera. 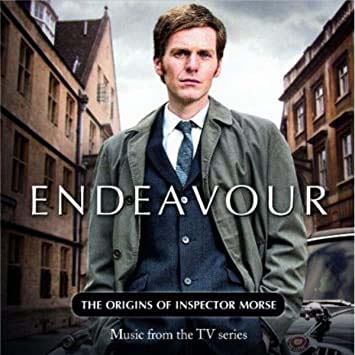 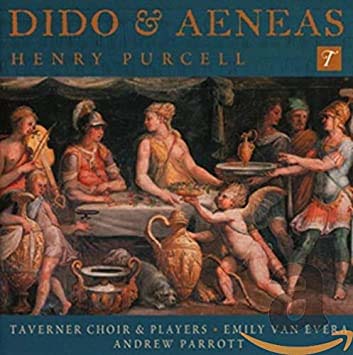 While we may not have cracked his code, we loved every minute of our visit to Oxford and the chance to wander through locations made memorable by Inspectors Morse and Lewis.

*The Oxford of Inspector Morse and Lewis by Bill Leonard (The History Press, 2010) is available all over Oxford, including at Blackwell’s Bookshop where several scenes take place.

You can purchase Emily van Evera's recordings from websites such as ArkivMusic.

Next time, a quick trip to Lisbon and an introduction to the remarkable food and wine of Portugal.

The original version of this article appeared in the Spring, 2017 edition of the Quarterly Newsletter of the Wine Society of Texas, a non-profit organization dedicated to wine education and appreciation.