Avoiding the Staples of Naples

At a recent business seminar, I was struck by the comments of a public company CEO. “Whenever someone tries to excuse their failure to complete an assignment by claiming that ‘I didn’t have enough time,’ I tell them time wasn’t the problem; they failed in setting priorities.” Looking back on our visit to Naples this past May, our priorities were fine. That our assignment remains incomplete is a compelling reason to return to this enchanting ancient metropolis in the shadow of the volcano and to allow more time to discover remarkable foods, wines, and cultural treasures.

The plan for Naples was hatched on a frigid winter afternoon this past February as a belated homework assignment from a beloved teacher, Eugene A. Carroll, Professor Emeritus of Art History at Vassar College in Poughkeepsie, New York. As my husband, Michael, and I stood in Eugene’s study surrounded by the books amassed during more than a half century of scholarship, I was intrigued by the image on his computer monitor. It was Portrait of a Young Man by Giovanni Battista di Jacopo (1494-1540), known as il Rosso Fiorentino or the redhead from Florence. Eugene was writing about it for the website he is creating. It is dedicated to this Italian artist who crossed the Alps to France and spent a decade at the court of King Francis I, transforming Fontainebleau Castle outside Paris from rustic hunting lodge to sumptuous showcase of Renaissance design. As we discovered, this portrait involved several enigmas and mysteries including the origin of a Turkish carpet depicted so exactingly in the foreground as a symbol of the sitter’s wealth and sophistication.

Since we were going to be in Rome in May on business anyway, why not make a side-trip to Naples with a visit to Rosso’s portrait in the Museo di Capodimonte to check as eyewitnesses several details for the project? It sounded like a fun assignment until days before our departure from Houston when we received bad news from Eugene. The picture was in Florence for a special exhibit and wouldn’t return home for several months. But with so many other things to see in Naples, we stuck to our original itinerary and headed for the Mezzogiorno, Italy’s fabled south.

We regretted that decision almost immediately after arriving on the high-speed train from Rome, when the taxi deposited us at a doorway huge enough to admit a carriage or several riders abreast on horseback. Above it a banner proclaimed “Decumani Hotel de Charme.” A bucket-full of something, ejected from an upper-story window across the street, had only just missed us while we alighted from the cab in a street so narrow it was barely possible to open the taxi’s doors. We made our way into the darkened courtyard, our attention attracted by noisy flapping of wings. We looked upward and saw boarded-up windows with pigeons flying in and out through gaping holes. Finally, we spotted an arrow pointing toward a stairway and the elevator to the second floor where the part of the building occupied by the hotel is located. I looked at Michael skeptically, suppressing the urge to panic. Had Trip Advisor steered me wrong, for the first time ever, and lulled me into booking the Neapolitan equivalent of a flop-house? With little sleep since leaving Houston the previous afternoon, we decided to give it a shot and consider an alternative the next morning, if we survived the night!

Dragging our bags out of the tiny lift, we were surprised (and relieved) to find a bright and modern reception area staffed by welcoming and helpful young Neapolitans eager to share their hotel and their city with us. Getting to our room meant following Elena along a lengthy corridor leading through the magnificent breakfast room that had been the reception hall for the archbishop whose residence the building once comprised. Not only was our room spacious and filled with antique furniture ingeniously adapted for use in modern lodgings, but the bed proved the most comfortable one on which we have ever slept. So much for first impressions, a lesson learned throughout our stay when run-down and graffiti-covered exteriors masked treasures within. 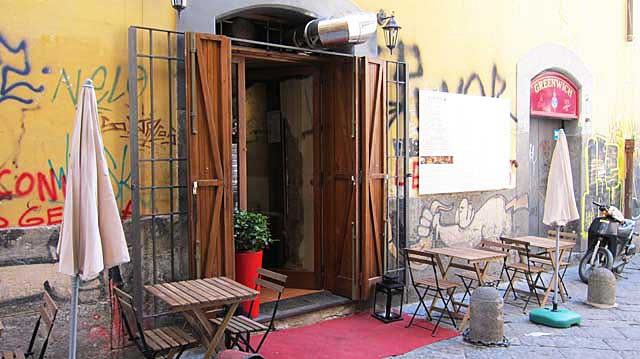 Thanks to Elena’s suggestion as well as her reassurance that the darkened streets were perfectly safe, we strolled around 100 yards toward the Spaccanapoli, the main drag splitting the city in two, to eat at Pulcinella Bistro before collapsing from jet lag. The restaurant, housed in a former museum dedicated to the plump and beloved figure from the Comedia dell’Arte, was small and with its kitchen located downstairs. As we were a bit early for dinner by Italian standards, we had the chance to visit with owner Eduardo. He explained that the bistro was new, dedicated to the freshest of ingredients from the Campania region and to the bounty from the Mediterranean. Since Eduardo’s English was on a par with my halting Italian, our lingua franca became French as we learned that the years Eduardo spent working in Southern France had inspired him to open this restaurant dedicated to all but what Naples is renowned for ̶ pizza.

His recommendation for a full-bodied red from the area resulted in the most enjoyable wine of the trip – Paestum Rosso 2011 from the Fratis vineyard – a tribute to the site of several ancient Greek temples south of Naples. As the wine breathed, we feasted on an amuse-bouche highlighting the seasonal delicacy of fried zucchini blossoms stuffed with an herb-infused cheese mousse. My main course was scialiatelli (typical noodles of the region) with mussels and more zucchini blossoms. The pasta was rich and chewy (in a good way) while the mussels lent their liquor to the light, wonderfully perfumed sauce. A salad of arugula with bresaola (cured beef), topped with intensely flavorful tomatoes grown in the rich volcanic soil on the slopes of Mount Vesuvius and curls of pungent cheese, rounded things off. Michael opted for potato-encrusted branzino, the intense flavor owing to small discs of fried potato encasing the delicate and savory fish. Continuing his decades-long and thorough investigation into the desserts of Italy, Michael pronounced the tiramisu the best he had ever tasted, owing to an artisanal mascarpone cheese whose flavor was not overpowered by other ingredients such as chocolate and coffee. We loved the food and wine so much that we ate at Pulcinella Bistro all three nights we were in Naples.

As we quickly found, the area within a 15-minute walk of the Decumani Hotel is full of history, museums, churches, and shops whose windows offer renditions of Mount Vesuvius in pastry, chocolate, plastic, and gelato. We didn’t see the legendary volcano itself until a drive up the hillside to the Capodimonte Park, the one-time hunting preserve of the Bourbon rulers where the impressive Museo di Capodimonte is housed in a huge palace completed in the 19th century.

We had taken along on our trip Robert Edsel’s Saving Italy, the account of the Monuments Men responsible for preserving ancient buildings as well as rescuing works of art comprising Italy‘s patrimony while World War II raged around them. While we strolled the quiet galleries, almost completely devoid of visitors, we wished the paintings could tell us of their harrowing journeys to secret hiding places in castles and monasteries, of hasty departures stacked like so many loaves of bread in the back of military trucks dodging bomb craters and sniper fire. Yet here they hung in this secure refuge surrounded by the park whose towering oak trees contribute to a sense of peace and timelessness. That so many people had risked so much to preserve them made these works all the more precious to us.

The paintings of Titian, Caravaggio, and other Italian masters, as well as an exhibit of Urbinoware, were dazzling. A huge room was devoted to a collection of tapestries commemorating the Battle of Pavia in 1525 when King Francis I of France, Rosso’s future patron, was not only defeated but captured by the Spanish forces in the ascendancy on the peninsula of a not yet unified Italy. But Francis ultimately snatched a symbolic victory from the jaws of defeat by having not only Rosso but also Leonardo da Vinci in his employ. From the latter’s estate the king purchased the Mona Lisa and hung it in Fontainebleau Palace. Did he envision that this painting he found so mesmerizing would someday reside in one of his other palaces, the Louvre, and have a similar effect on millions of visitors each year from all over the world? 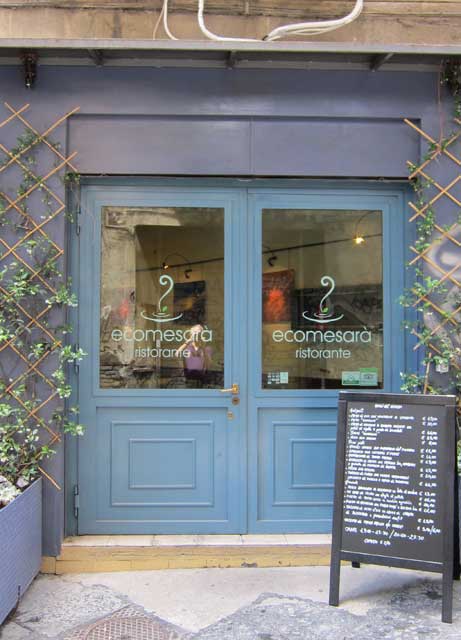 Famished from spending most of the day in the Museum, we were ready for a late lunch. With the help of the App from TripAdvisor.com we were able to eliminate all the pizza joints near our hotel and peruse the menu at Ecomesarà, another gem of a restaurant devoted to local ingredients and featuring wines from the region. The last of the luncheon patrons was departing as we arrived. We spent the next several hours enjoying the food and talking with owner Cristiano, a former boat captain from Capri, whose love of food and wine led him to open this stylish restaurant on the Via Santa Chiara near the entrance to that church’s famous gardens. 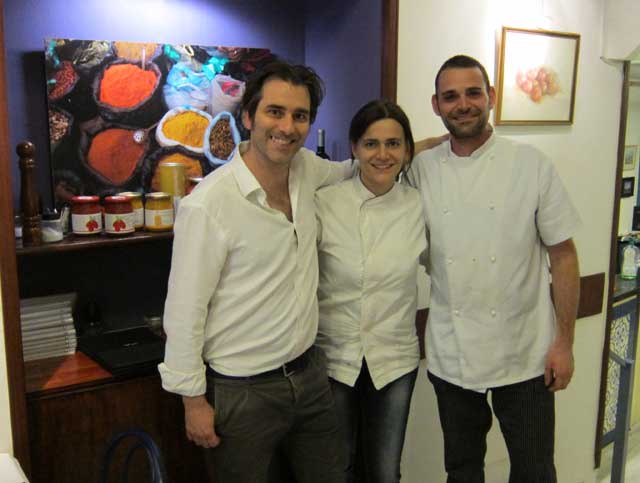 It’s not often we see goose breast on a menu and so Michael could not resist it. Pan-seared with green peppercorns, it was served with a carrot sauce and tomato confit. I opted for lasagnetta with strawberries, shrimp, and pistachios from their hometown of Bronte in Sicily. The lasagnetta was light and scrumptious, constructed of delicate layers of crêpes instead of pasta. For dessert, Michael had cassata al forno, which we could term "cheese cake" but which would not begin to do justice to this traditional confection from southern Italy involving baked ricotta cheese, brilliantly reinterpreted at Ecomesarà. We loved the food so much that we returned for lunch the next day, enjoying noodles tossed with fresh marjoram, zucchini, and a special cheese from Sorrento, plus more cassata, before catching the high-speed train for the hour-long trip back to Rome.

Rosso Fiorentino’s Portrait of a Young Man will eventually make its way back to Naples and so, we hope, will we, with the chance to complete our homework assignment and enjoy more of what this captivating corner of Italy has to offer.

Sadly for lovers of fine Italian food, Ecomesarà has closed after seven years of operation.

Next time, stuck in La Belle Epoque and loving it.

The original version of this article appeared in the Summer, 2014 edition of the Quarterly Newsletter of the Wine Society of Texas, a non-profit organization dedicated to wine education and appreciation.