The British Isles have endured their share of invasions in centuries past, including culinary conquests by the likes of the Romans, Vikings, and Normans. Recent decades have seen an influx of Indian, Thai, French, Italian, Japanese, and other nationalities of restauranteurs who, coupled with the efforts of outstanding homegrown chefs, have made London one of the world’s culinary capitals.

On our visits to London in May of 2010 and in October of 2011, my husband, Michael, and I enjoyed memorable meals and outstanding wines. With only one exception, we managed to avoid the dreaded Carvery where hunks of roasted beef, lamb, and pork may languish for hours under heat lamps until a dried-out slice is hived off and piled onto a plate with desiccated potatoes or Yorkshire pudding. Instead, we found ourselves feasting on exquisitely prepared succulent fowl, tame or wild, and loving it. 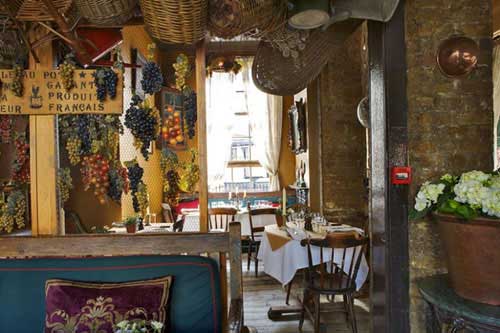 In 2010 we first discovered La Poule au Pot, on Mozart Square in London’s Belgravia neighborhood, thanks to a recommendation for French restaurants serving duck from the concierge at our hotel, a short stroll away. A London institution since the 1960s, La Poule au Pot offers traditional French fare in a tiny building on a corner, its kitchen in the basement. From the ceiling hang baskets, pots, and dried flowers above small tables channeling the cozy atmosphere of a French restaurant in the countryside, devoted to seriously good eating.

France’s King Henri IV (1553-1610), the first monarch in the Bourbon dynasty, is revered for saying that French families should be sufficiently prosperous to have poule-au-pot every Sunday. While controversy remains over whether he uttered this maxim, the traditional dish of stuffed hen, cooked in a pot, remains a staple of French cuisine, including on the menu of this London eatery of the same name.

On our first visit, I ordered what was described as duck breast with lime. Michael feared it would be too citrusy and so opted for veal liver instead, but the lime flavor proved subtle within the sauce made from pan drippings. The duck was perfectly cooked and delicious, especially with the accompaniment of the red Burgundy wine we had chosen. What transformed Michael into a devoted fan of the restaurant was his dessert of bananas in a caramelized sauce. So enthusiastic were we that, as we left, we booked dinner for the following week after our short business trip to Croatia.

Our 2011 visit to London, for UHY International’s annual meeting, was sandwiched between stays in Paris for Michael’s antiques business but happened to coincide with grouse season in the U.K. The perfect place to try this most British of birds, never successfully domesticated and still hunted on the moors of Scotland, was Racine, a French restaurant in Knightsbridge with a gifted British chef and owner, Henry Harris. 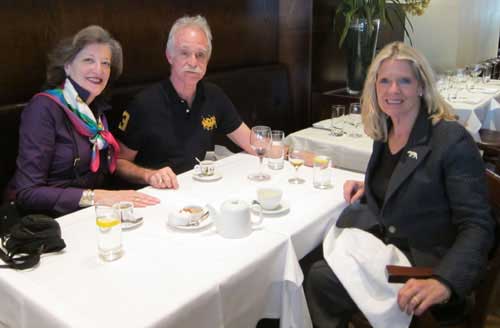 On bustling Brompton Road and caddy-corner from the Victoria and Albert Museum, Racine is a popular destination for lunch and dinner. I first ate there in 2004 with Christopher Wilk, my classmate from college and the Keeper of Furniture, Textiles and Fashion at the Museum. Coinciding with my two-year absence from visiting France, Racine’s offering of the Deux Charentes region’s incomparable and hard-to-find Echiré Butter provoked raptures of delight and my consumption of way too much bread and butter while we reminisced about Professor Eugene Carroll and how his Art History lectures shaped both of our careers. Our most recent visit to Racine was for lunch with Laura Holt, another former student of Eugene’s, and a long-time resident of London.

Sticking with our fowl theme, we shared a starter of foie gras of goose accompanied by glasses of Sauternes. Michael opted for a main course of grouse, bread sauce, and Armagnac gravy. I know little about grouse except that its American cousin, the ruffed grouse, is the official bird of the Commonwealth of Pennsylvania where my father used to hunt it and my mother attempted to make it edible. Nothing prepared us for the plate placed in front of Michael. The entire bird, in size somewhere between a Cornish hen and a chicken, was exquisitely roasted. Michael dug in and carved it up while Laura and I enjoyed tastes. The meat was dark red in color, a bit disconcerting, but not from being undercooked. It was gamey but delicious, an acquired taste and one well worth cultivating.

Laura and I both opted for the day’s special, breast of pheasant stuffed with leg meat and mushrooms. A far more subtle taste than the grouse, it was especially flavorful when complemented by the deeply purplish Malbec from Cahors which we had selected to accompany our birds.

As if legendary butter and fowl were not enough, Laura and I indulged in desserts. Called Mont Blanc after France’s Alpine peak, this traditional and beloved concoction involves a base of meringue below a mound of chestnut cream (forced through a sieve or small gauge pastry bag and looking like whole wheat spaghetti) and topped with whipped cream. Racine’s version was innovative and huge, benefiting from the addition of a rich chocolate sauce. 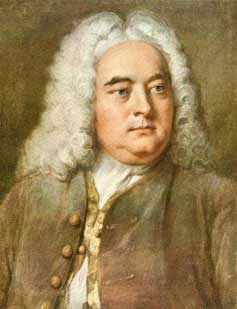 No discussion of fowl in London would be complete without considering George Frideric Handel (1685-1759), the Baroque era musician who, despite being born in Germany as Georg Friedrich Händel, spent almost his entire life in England and became one of the country’s most adored composers. His last name, in German, evokes the beloved roast, stuffed chicken known as Brathändel, a sort of Teutonic version of poule-au-pot, on which Georg Freidrich must have grown up in Saxony.

Handel lived in London for a half century, most of that time in the house on Brook Street in Mayfair that, for the last decade, has been home to the Handel House Museum. Well worth a visit, it is awe-inspiring to stand in the tiny room where the great man composed and presided over rehearsals with the vocal superstars of his day. His output of over 40 operas (including Rodelinda, which had its Houston premiere last month in a performance by Mercury Baroque), close to 30 oratorios (including Messiah, also being performed this season by Mercury Baroque), and some of the most famous pieces ever composed to accompany royal pageantry (Music for the Royal Fireworks and the Water Music), guaranteed his perch in the pantheon of great composers and his final resting place in Westminster Abbey.

Described by contemporaries as “corpulent,” particularly in his later years, it is a fair bet that Handel enjoyed some of the same rich fowl dishes as today’s visitors to his house can enjoy throughout his adopted hometown. Handel’s imagination ran to fowl as well, including one of his most famous compositions, the Cuckoo and the Nightingale, a concerto for organ and orchestra in which bird calls are imitated in the organ’s highest register. 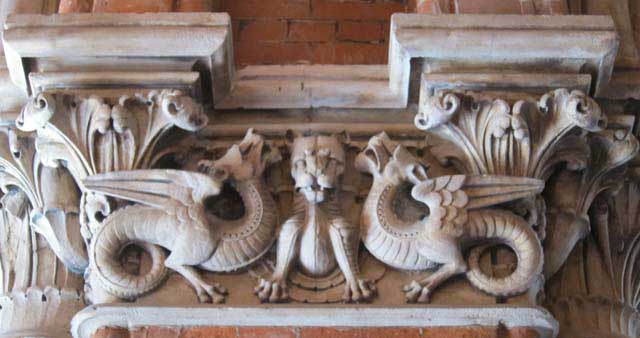 Fabled birds also played a role in our lodgings in London. Having visited Saint Pancras Station in 2010, we were captivated by the ongoing renovation of what has now become the terminus of the Eurostar high-speed train from Paris. Dating back to the 1870s, when British railway companies outdid themselves in competing for passengers and in erecting Gothic Revival stations with hotels attached, Saint Pancras dodged the wrecker’s ball and the Luftwaffe’s bombs but lay dormant for decades before a multi-million Pound face-lift assured the future of the Renaissance Hotel Saint Pancras that opened in 2011. As soon as we learned we would be heading for London, we reserved a room and garnered the chance to wander this magnificent edifice used in films as diverse as Batman Begins, King Ralph, and Harry Potter and the Chamber of Secrets. The renovation of the station included cleaning and preserving many fearsome looking mythical yet inedible feathered creatures, such as those shown on the column capital in the photo.

Before heading back to Paris, we had one last meal at La Poule au Pot with international marketing guru and friend from our sojourn in Southern California, Allyson Stewart-Allen. I opted for a starter of arugula, mushrooms and cheese – a captivating and rich combination of peppery greens and mild cheese in a salad large enough for a meal. As the main course, Michael had the duck with lime. I had guinea fowl (pintade), another first for us, in a sauce incorporating Calvados and cream. The bird was tender and delicious, the sauce so scrumptious I would have happily licked every drop from the plate. Allyson had the day’s special, partridge, which involved a struggle to prize every morsel from the bones. She pronounced it well worth the effort. Accompanying it all was a red wine from Pic Saint Loup, another winner in our quest to enjoy excellent wines from the less heralded Languedoc region of France.

Having flown the coop for two food and wine-filled weeks, we were happy to return home to a steady diet of chicken — but with cherished memories of our staple’s more exotic cousins.

To read more about the types of wild fowl we sampled and how to obtain them in the U.S., visit the website for D’Artagnan products.

Sadly for us and other lovers of great food, Racine has closed after 12 years.

For an incomparable taste of Handel’s music, consider Drew Minter’s recordings including Handel Operas Vol. 1 on Harmonia Mundi at ArkivMusic.

Next time, feasting en famille on the outskirts of Paris.

The original version of this article appeared in the Winter, 2011 edition of the Quarterly Newsletter of the Wine Society of Texas, a non-profit organization dedicated to wine education and appreciation.