Lisbon for the Spice of Life

When I headed to Lisbon, it was a last-minute trip to attend an RSM conference of accounting and tax colleagues from Europe where we concluded a refinancing plan for a client. That London-based RSM International had selected Portugal as the venue was a choice not lost on tax history buffs. England’s close relations with Portugal stretch back at least as far as the Hundred Years War with France (1337-1453) when John of Gaunt, the Duke of Lancaster, became father-in-law to the King of Portugal. The war’s disruption of supplies of French Malbec left the English thirsty for a high-quality replacement. That gap was filled by their Portuguese ally whose wine was imported tax-free thanks to Europe’s first bilateral free trade agreement, the Treaty of Windsor (1386).

My curiosity about Portugal dates back to grade school when we learned of voyages along Africa’s coast and on to India, by explorers such as Vasco da Gama, on a quest to corner the spice trade by cutting out the Ottoman middlemen and their Venetian partners dominating the pricey land route to voracious European consumers. The sheer audacity of these high risk ventures put the Portuguese at the top of the heap during the early decades of the Age of Discovery. Once Columbus got into the act on behalf of the Spaniards, looking for a westbound route to India and the Spice Islands, the heat was turned up on the Portuguese, leading to a less than advantageous division of the New World enshrined in the Treaty of Tordesilhas (1494). That the Spanish ended up with the gold from Peru, while graciously sharing its potatoes with the rest of Europe, shifted the balance of power away from Portugal for centuries to come. 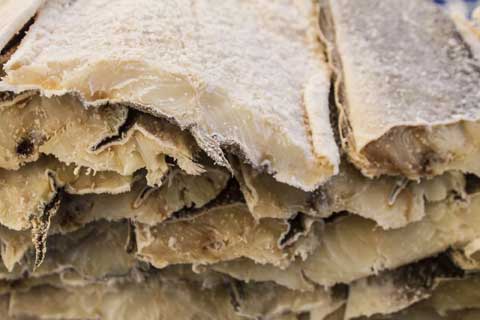 To feed their crews on long sea voyages, the Portuguese developed a process for air-drying fish so that it could be reconstituted with water and cooked up to provide nourishment for famished sailors. While they initially used fish caught near Portugal, the oily and abundant ones such as mackerel and sardines proved unsuitable. When a less unctuous yet plentiful species of codfish was discovered in the seas off Newfoundland, bacalhau was born. This dried cod has been a staple of Portuguese gastronomy ever since. With potatoes from the New World coming along on voyages back home, bacalhau found its ideal match for a long-term marriage made in culinary heaven.

Armed with scant preparation but lots of enthusiasm for discovering a city built with the wealth of globetrotting merchants, I arrived in Lisbon on a sunny and hot afternoon. My command of the Portuguese language is limited to a few phrases memorized for business trips to Brazil. Fortunately, my taxi driver spoke some English. Like every Lisboeta I encountered, he was proud of his city and eager to share his knowledge with a first time visitor. Hilly, Lisbon is a city of grand parks encompassed by streets lined with colorful flowering trees and blessed with a perfect climate. The great earthquake of 1755 and subsequent tidal wave leveled most of the structures but a rebuilding boom ensued, resulting in the monumental architecture gracing today’s wide boulevards and spacious plazas.

Over lunch on the first day of the conference, I met Carlos Carvalho and Ana Antas from RSM Portugal’s office in Porto. Passionate wine enthusiasts, they gave me a crash course on Douro, their favorite of the country’s 14 wine regions, as I scribbled down their recommendations including its crowning glory, Barca Velha.

Portugal’s urge to share its high quality vintages with the rest of the world dates back to the Roman Empire when wine was shipped to Italy along with garum, a fish-based sauce described as the ketchup of the ancient world and experiencing its own renaissance. Despite limited wine production compared to titans such as France and Italy, Portugal is now a net exporter whose domestic output is downed by the country’s enthusiastic inhabitants who rank sixth in the world for per capita consumption of wine.

The gala dinner of our conference focused on traditional Portuguese cuisine catered in the covered courtyard of one of the government buildings lining the Praça do Comércio, the huge open square by the Tagus River. For the main course, the marriage of bacalhau and potatoes took center stage. The tender and flavorful cod was seared in a coating of cornmeal and accompanied by batatas a murro or potatoes that have been baked and then "bashed," after which they are topped with garlic, salt, and olive oil before a brief second baking. This process intensifies the potato flavor far beyond what any conventional baked spud could offer. Dessert was Pudim Abade de Priscos, a custard-like concoction of rich creaminess and subtle flavors. It was named for Manuel Joaquim Machado Rebelo, a 19th century abbot of the church of Santiago de Priscos, who was more renowned for cooking (including for Portugal’s royal family) than pastoring. The evening was capped by a performance of fado, Portugal’s iconic vocal music conveying passion, loss, and longing, the enjoyment of which was boosted by numerous glasses of delectable port.

I snuck away from the conference one evening for dinner with Valentina and Vladimir, friends of friends from Russia but who live in Lisbon as home base for their business as sports agent and Olympic coach. They promised me outstanding local food away from the touristy areas, on one of the narrow cobblestone streets lined with small eateries. 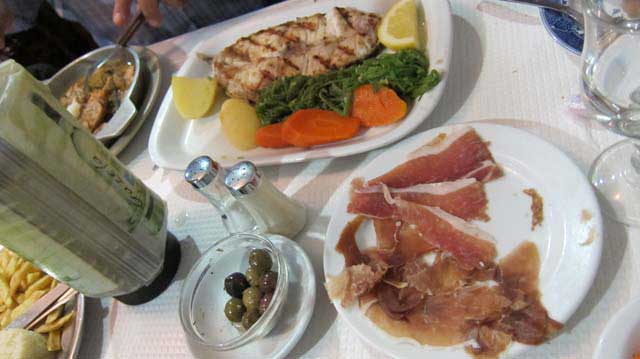 Casa dos Passarinhos proved a great choice where the small dining room was decorated with expansive photos of early 20th century Lisbon and packed with families enjoying a night out. We started with appetizers of cheese, cured ham, and bite-sized morsels that reminded me of Spanish croquetas, but much spicier. For my main course I had a steamed whole fish that was teeming with tiny bones compelling a leisurely pace of contented consumption. Accompanying it were French-cut green beans and boiled potatoes destined for drizzling with fragrant Portuguese olive oil. Everything had rich flavors, enlivened but never obscured by such fundamental elements as garlic and fresh herbs along with the olive oil. Accompanying it all was a local mineral water called Vitalis and a crisp white wine from the Alentejo region, Cartuxa Evora, whose chill was maintained by a charming little quilted cozy.

On my final night in Lisbon, I joined colleagues from Scotland for a dinner at Sabor e Arte on the ground floor of an office building near our hotel. The style was contemporary and the walls were decorated with life-size scenes from nearby streets, including of a streetcar whose collision with our table seemed imminent. As an appetizer we shared a plate of shrimp and papaya with a light mayonnaise sauce, an intriguing mixture of fresh flavors. For my main course I had roasted octopus with potatoes and olives, a stunning medley of tastes and textures with the olives complementing but never overpowering the dish. Dessert was a pear poached in red wine. Its perfectly calibrated aromatics and perfumed effect were reminders of Portugal’s one-time domination of the global spice business. 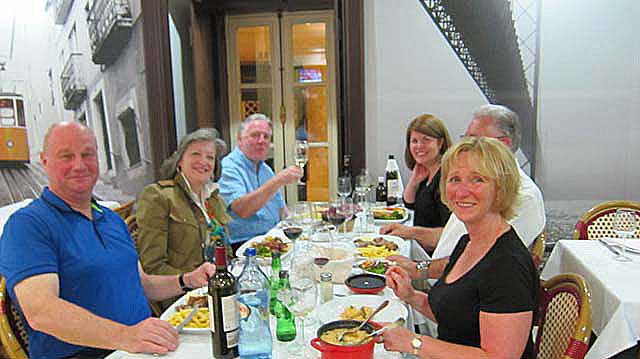 The wines picked by my Scottish colleague, a frequent traveler to Portugal, were stellar. We started with a white wine made from the Encruzado grape by Quinta dos Carvalhais in the mountainous Dão region. It was fresh, dry, and just “minerally” enough. Following it was a Grande Reserva red from the Carm winery in the Douro Valley. Full-bodied, intense, wonderfully satisfying in its complexity, this was the best pour of my stay.

While Portugal shares the Iberian Peninsula with Spain, it endures as a richly distinct culture with cuisine and wines to match. With so much to explore and experience, Lisbon deserves far more of an effort than my hastily arranged trip had afforded.

Next time, we’re on the trail of Mary, Queen of Scots.

The original version of this article appeared in the Fall, 2019 edition of the Quarterly Newsletter of the Wine Society of Texas, a non-profit organization dedicated to wine education and appreciation.