Out for the Count in Languedoc

Could a Paris antique fair be a great place to discover wines of small producers from all around France? Surprisingly, the answer is “yes” as my husband, Michael, and I have discovered during our regular business trips to the French capital. As lovers of French food and wine will know, the country is dotted with delights of regional origin, whether wine, cheese, meats, fruits, and for us, antique furniture. It was at a Paris antique fair a few years back that we discovered a producers’ cooperative based in Cahors (southwestern France) that had brought its wine and food selections to the fair. 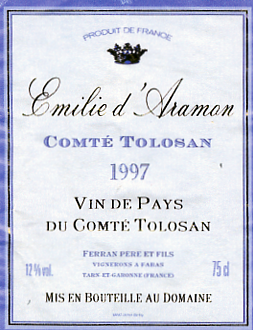 The day we happened by, on offer was a lunchtime “value meal” consisting of a sandwich and a glass of white wine. The sandwich consisted of slices of duck foie gras arranged on a baguette and accompanied by a ¼ liter glass of a Vin de Pays du Comté Tolosan. Instead of the unctuous Sauternes served reverently on New Year’s Eve with foie gras of goose liver, the pale and fruity wine on offer was light and refreshing, fragrant of pear and apricot. It was the perfect complement to the sweetish duck liver. We bought several bottles to drink while we were in Paris and hoped to track it down in Houston when we returned home.

As we learned later while searching for it on the Internet, Comté de Tolosan is, in addition to the designation for the wine grown in the area, the ancient term in the Occitane language for the “county” ruled by the Counts of Toulouse. They are particular favorites of ours since in the 14th century they helped found the first limited liability companies, that lasted 600 years, and gave corporate law such seminal concepts as the board of directors, independent auditors and shareholders’ rights. If only modern shareholders had adopted their model, Enron and the financial crisis would have been avoided.* Who knew that they played a leading role in viticulture as well.

Regrettably, the wine was nowhere to be found in the U.S. That left us no alternative but to head for the cooperative in Cahors. So on a trip to visit some of architectural monuments of southwestern France, such as the walled city of Carcassonne and the redoubts of the Cathars from our base at the Hotel Château de Floure, we planned a day-trip to Moissac with a detour to Cahors.

The cool October morning started out dry and partly sunny as we headed north through farm land and vineyards as far as the eye could see. Suddenly, the hills gave way to the deep valley carved by the Lot River, along whose banks the city of Cahors grew from medieval times when it was renowned for its “black wine,” as English traders named the dark red liquid made from the Malbec grape and now enjoying a resurgence with its own designation.

With great anticipation we reached the cooperative, on a steep hill outside the city, hopeful that our quest would soon be at an end and we could ship a case of the treasured white wine back to Houston. Yes, the saleslady knew the wine well, but “il n’y a plus.” Such were the words we had heard too often in France and had come to loathe. The final case on hand had been sold a few days ago. Limited production. We should come back next year. She offered some other white wines for us to taste, but nothing compared to our memory of the one we’d enjoyed in Paris. As a consolation, why not try the restaurant next door, she suggested, since we had come so far and it was lunchtime anyway.

Skeptical, we headed across the tarmac past parked cattle carriers and oil tankers to what looked like a glorified truck stop. What we found was rural France’s answer to fast food – a sandwich of sliced duck breast, raised locally, and smothered in a sauce of wild mushrooms harvested nearby that morning. For dessert, a freshly baked tart of forest berries. Accompanied by a pichet of local red wine, a fabulous lunch cost about $8 a head. Utterly delicious, it was like so many of our serendipitous finds in la France Profonde, beyond our expectations – but normal for the food-loving French folks living there and enjoying it all the time.

Amply refueled, we headed for Moissac. The sky turned darker and the countryside seemed ever more deserted while we drove past tall outcroppings with medieval villages perched on top and ancient stone farmhouses with satellite dishes pointed heavenward. By the time we got to Moissac, it was cold and pouring down rain. Not the best way to view the Romanesque carvings over the door at St. Pierre, but they are a reminder of how important the 12th century artwork of the church and cloister were in the development of western culture and as a vital stopover for pilgrims making their way to Santiago de Compostela. How arduous travel was then, compared to zipping back to Floure in our rental car through the ancient city of Toulouse, now also France’s ultramodern capital of the aerospace industry.

The cold and rain had their effect on our mood and our appetites. We were anxious to return to the hotel for dinner by the roaring fire and Chef Poirier’s version of the legendary Cassoulet (casserole of sausage, duck and white beans) originating in nearby Castelnaudary (where the autoroute exit signs show a steaming pot).

It was at Floure that we made two other discoveries that have proved less elusive than the wine of the Counts of Toulouse – Maury, a fortified red wine that is a terrific aperitif from the Roussillon area, and Domaine de l’Hortus, a complex red wine from a wild area of Languedoc still bearing the name given by the ancient Romans who strove to tame it.

History, art, food and wine – are at the heart of France. And while Provence gets a lot of attention as a destination for vacationing and eating and drinking, we were delighted to discover that the Languedoc-Roussillon region next door is no slouch. Less traveled but rich in agricultural bounty and natural beauty, it is every bit worth the visit. For wine lovers, the Languedoc has been gaining in reputation beyond its traditional association with the vin ordinaire that populates grocery store shelves, as small wineries focus on the traditional grapes of the region with new dedication and superb quality. The good news is that there is a huge selection of wonderful wines to try, but the bad news is that you will not be able to find them back in the U.S. or even as relatively nearby as Paris. And while we never did find the white wine we remembered so fondly, we had a great time in the countryside creating new memories and reasons to return again.

Next time, a rare bad meal leads us to find a cure where Vincent van Gogh also sought one.

The original version of this article appeared in the Fall, 2009 edition of the Quarterly Newsletter of the Wine Society of Texas, a non-profit organization dedicated to wine education and appreciation.