Musseling in on Trips to Belgium

Why would anyone write for this Newsletter about Belgium, a land where beer is king and wine-making died out in the Little Ice Age? Because Belgian mussels, harvested in the morning and served that evening after steaming in white wine, are as close to heaven as any wine lover can get.

For one of our regular furniture-buying trips to Belgium, where due to creative tax planning some of the best French antiques wind up with local dealers, my husband, Michael, and I decided to spend a few days in Bruges and experience the Venice of the North.

On a hair-raising trip from Paris’ Charles de Gaulle Airport, ranging from dusk into nighttime on motorways and back roads, through countless construction zones and detours, we had begun to believe we were on a never-ending loop destined instead for Brussels. Encouraged at numerous stops for directions, by sympathetic gas station attendants and bartenders, we arrived hours late and exhausted at the Pand Hotel in the heart of Bruges. Happy to banish our rental car to an 18th century prison, now a parking garage, we longed to enjoy a few days of exploring Bruges as pedestrians.

Owing to what historians could term a fortuitous silting up of the harbor at the head of the water route between Bruges and the North Sea, the city became, literally, a backwater from the end of the 15th century until its “rediscovery” in the early 20th century. A happy accident, the buildings from the economic boom times of the 14th and 15th centuries were never torn down and replaced with more modern structures. Today’s tourists experience Bruges in a time warp, as in its heyday when it was one of Europe’s most significant commercial and artistic centers.

Much of Renaissance Bruges, inside and out, is still on display in the paintings by Flemish artists such as Jan van Eyck and Hans Memling at the Saint John Hospital Museum and the Groeningemuseum. Van Eyck, as one of the developers and early adopters of oil-based pigments, transformed the ability of artists to achieve verisimilitude. Thanks to Bruges being the northern outpost of Italian banks, works by Flemish masters were snapped up by Florentine financiers and shipped home, fueling a similar revolution in painting south of the Alps. Van Eyck memorialized the wedding of an Italian banker, Giovanni Arnolfini, in Bruges (the work hangs at the National Gallery in London).

While telling a grander story, the Flemings reveled in depicting the minutest of details — strands of squirrel fur on the cuff of a garment, intricately carved animal figures on furniture, golden threads comprising thistle patterns of a cardinal’s vestments, the filaments of colorful Caucasian carpets, light reflecting on richly tooled armor. Awestruck, we lingered in front of work after work of incomparable virtuosity, marveling as intended at the status symbols that merchants had amassed. Such wealth enabled the commissioning of renowned painters to memorialize the patron’s families as onlookers in scenes such as the Baptism of Jesus or the martyrdom of a saint.

Conspicuous consumption was not on our itinerary when it came to eating and drinking in Bruges. Rather, we were bent on enjoying shellfish as the Belgians do. Our quest involved the cherished moules frites. While the term could be translated as “fried mussels,” it is instead the French-language moniker for steamed mussels with the obligatory side dish of fried potatoes (what we would call “French fries” but never while in Belgium).

Belgians eat more mussels per capita than any other nationality and have developed countless creative ways to prepare them. Not deemed sufficiently sophisticated, or perhaps a bit too messy, moules frites do not grace menus at Michelin 3-star restaurants. Enjoyed by the masses, from autumn through spring, mussels are on offer throughout the country at local eateries dedicated to the high-volume consumption of these succulent bivalves and their fried potato cohorts. Extracting the meat from the shell and sloshing it around in the broth along with chunks of toasted garlic bread may not be the most elegant way to dine, but is hard to beat for sheer pleasure. 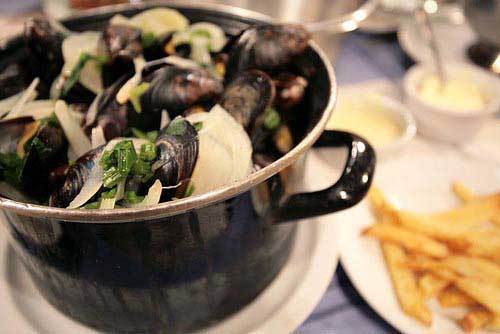 Based on our hotel’s recommendation, we headed for the restaurant Breydel de Coninc at the edge of the square named for Jan Breydel and Pieter de Coninc, medieval heroes honored with statues there. Tiny, the restaurant blended bar and seating area filled with diners already well into their mussel experience accompanied by tall glasses of Belgian beer.

We ordered the traditional version, mussels steamed in a mixture of white wine and cream with chopped celery, carrots, onion, and a little garlic. A short while later, cast iron pots arrived at the table, brimming with mussels in their shells. I leaned over and inhaled deeply the intoxicating steam, essence of the sea enhanced by wine and onion. These mussels were the large, meaty, and tender “jumbos,” as the Belgians call the biggest variety, harvested from river estuaries along the North Sea near the Dutch border. Accompanying them was a bowl of fries, the crowning glory of the Belgian method of preparation involving frying potatoes twice to produce the crispy exterior while keeping the interior from going soggy. Served with a little cup of mayonnaise (not of the jar variety) for dipping, we understood instantly why this version of “French fries” is so beloved that there are take-out shops on squares and in train stations throughout the country. Needing to prize each nugget of meat from the shells forces a slow pace of consumption and utter enjoyment of the moules frites ritual. Not being beer drinkers, we ordered a bottle of Viognier that proved the perfect accompaniment to the mussels and the garlicky toast.

Hungering for the mussel experience but can’t get to Bruges anytime soon? Head for the frozen dinner section at your local HEB for a bag of Central Market brand "Mussels Marinière," imported from France. The mussels have already been shelled and only need be popped into a skillet along with the frozen pellets that melt into sauce. We recommend adding a quarter cup of heavy cream and cooking for an extra 30 seconds before serving. While the jumbos are simmering, bake the 3 mini-baguettes that came in the same package. All the flavors come together, the kitchen smelling like Breydel de Coninc. Accompanied by a bottle of Becker Viognier, recreating a great European treat is achieved without leaving your Texas kitchen! Now, if only Central Market could figure out how to recreate authentic (Belgian) fries as well.

Next time, a fruitful trip to Prague with oranges as a theme.

The original version of this article appeared in the Spring, 2011 edition of the Quarterly Newsletter of the Wine Society of Texas, a non-profit organization dedicated to wine education and appreciation.