Recalling Icons of a Bygone Era on a Trip to Bologna

Things did not start off well on a business trip to Bologna this past March. As I slid into the back seat of the taxi for the short ride from Aeroporto Guglielmo Marconi into the city and uttered the hotel’s name and address in my halting Italian, the driver nailed my accent as American and informed me emphatically, in English, that “there’s no such thing as Spaghetti alla Bolognese – it’s an American invention!”

Okay, I thought, and strove to steer the conversation in another direction. I explained that while I had visited Italy a number of times, it was my first visit to the Emilia-Romagna region, birthplace of luxury sports cars, grand opera, world-class hams and cheeses, and so I was obsessed with trying local specialties during my two-day visit. What did he recommend? His tone changed instantly. It turned out that Daniele was a part-time sommelier, passionate about the region’s foods and wines.

Daniele’s culinary passions and recommendations revolved around ragù alla bolognese, the hearty sauce whose home is Bologna and which is thick and reddish brown from its base of meat (veal, pancetta) browned in butter with chopped carrot and onions, then cooked in beef broth. Variations can involve the addition of tomato purée and a bit of cream. Served over broad flat noodles such as tagliatelle or pappardelle (but never spaghetti), it is also the sauce layered into baked lasagna, another typical dish. By the time I alighted, we parted friends and I had a far better idea of what to eat and drink. 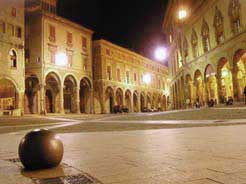 I met up with Paolo from UHY Rome and Mark from UHY Houston (albeit a transplant from Italy) in the lobby of UNA, a stylish yet reasonably priced business hotel across from the train station. We were joined by our client, Andrea, as host for the evening. From a small town not far from the city, Andrea had come to Bologna to study Finance at the city’s famed University, the world’s oldest (founded in 1088), and never left. He was raised speaking the local dialect dating from the time before the ancient Romans conquered the Etruscans and Celts already living in the region and exploiting its agricultural bounties. These remain at the heart of cooking and commerce in modern-day Bologna, Emilia-Romagna’s capital.

Anxious to show us some of his adopted home town, Andrea led us through the medieval city gate and into the 22 miles of Bologna’s signature arcaded walkways that are set into the ground floor of buildings and separated from the street by broad archways. Even on a cold and rainy Sunday evening, Bologna’s architecture was dazzling, especially the pair of tall stone towers, one leaning, the ancient churches and broad plazas. Andrea provided a running commentary on all we were viewing. It was a tantalizing taste of a fascinating city and I regretted that my stay would be such a brief one. 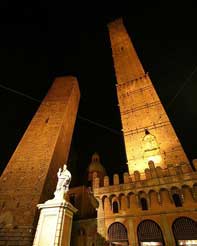 We arrived at Vicolo Colombina hungry and ready for an evening of traditional Bolognese dishes with a modern spin. Since we had lots of work to do the next day, our wine intake was limited to one bottle. Andrea chose Lambrusco Canova from Fattoria Moretto. Dry, yet not too much so, this regional red wine, served a bit chilled, was slightly effervescent, pleasingly fruity, and utterly enjoyable.

Our meal started with a traditional shared appetizer, a platter of cured meats including various hams and salamis from local artisans. On top were crumbled bits of parmiggiano reggiano cheese so sweet and distinctive I longed for an entire plate of it.

As my first course, I had lasagna. Not the stuff of the pot-luck dinners after high school choir practice, this lasagna was barely three-quarters of an inch high with nary a dollop of tomato paste or ricotta cheese in sight. Instead, it was comprised of delicate layers of broad noodles with cheese and a ragù made from white meats blended with chicken broth and cream, instead of béchamel. The flavors blended seamlessly and the slight toastiness of the cheese, from a final pass through the salamander, offered a bit of contrasting texture. It was superb.

As our main course, three out of four of us had the evening’s special – slow-roasted guinea fowl on a bed of Swiss chard. The meat was tender and succulent, harmonizing nicely with the leafy vegetable and proving a deliciously different dish for this American visitor. The little dove (colombina) had lived up to her reputation as one of the most interesting places to eat in a city known for great eateries. 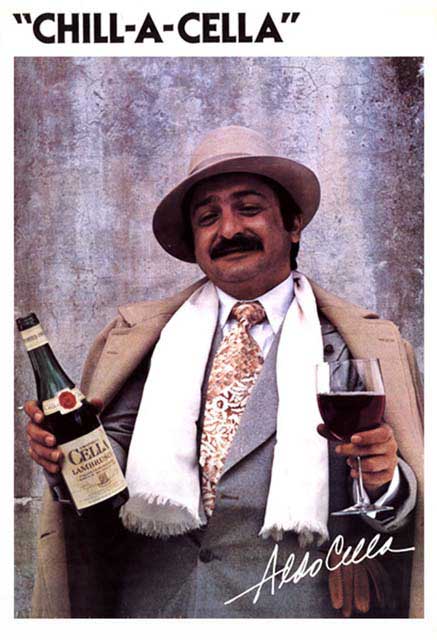 As we strolled back to the hotel, I reflected on how far Americans like me have evolved when it comes to appreciating Italian food and wine. Raised in an era when few knew pasta from pesto, we feasted on spaghetti and meatballs slathered with sauce from a jar named Ragu and topped with parmesan cheese from a can, while watching on TV a dapper Aldo Cella in a Borsalino hat reminding us to "chill-a-Cella." I was in a far better place after an evening of authentic ragù and lambrusco in the region they call home.

The original version of this article appeared in the Fall, 2013 edition of the Quarterly Newsletter of the Wine Society of Texas, a non-profit organization dedicated to wine education and appreciation.